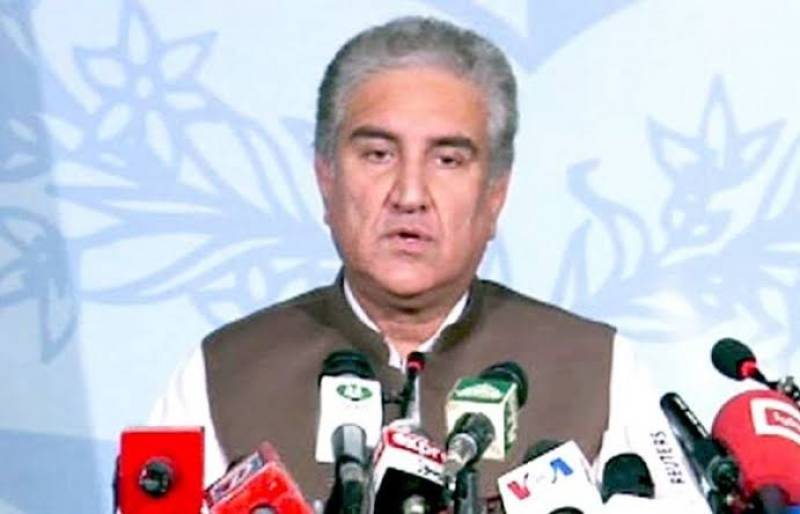 ISLAMABAD - Foreign Minister Shah Mahmood Qureshi said that a campaign will be launched from 25th of January to highlight the issue of Occupied Kashmir through print, social and electronic media.

Addressing a news conference in Islamabad, he said a cultural show with regard to the Kashmir will be arranged at PNCA on 27th January.

He said a photo exhibition regarding the struggle of Kashmiris will be held on 28th January across the country.

Foreign Minister said a seminar will be conducted on 30th of January in Islamabad to raise the Kashmir issue. He said Chairman Kashmir Committee Syed Fakhar Imam will hold a press conference on the issue of Kashmir on 31st January.

He said a function will be arranged at the convention center to share and discuss the ground realties of the held valley with the youth and on the same day ration will be distributed in the refugee's camps of Kashmir.

He said an event regarding Kashmir Day will be held at Aiwan-e-Sadar in which the entire diplomatic corps will be invited. He said four to five different events including formation of human chain have been planned on 5th February to vigorously highlight the issue of Kashmir.

He said Prime Minister Imran Khan will also address a public gathering at Mirpur to raise the issue of Occupied Kashmir. He said rallies will also be taken out across the country to express solidarity with the Kashmiri brethren.

The Foreign Minister said regional peace and security is under threat after the 5th August step of India to revoke the special status of Occupied Kashmir.

He said a humanitarian crisis is being witnessed in Occupied Kashmir and ground realities are corroborating our narrative on Kashmir. He said one hundred and seventy five days have passed of the lockdown of Kashmir where all fundamental rights are usurped. He said more than 8 million people are virtually prisoners, both physically and psychologically.

In this context, the Minister said, Prime Minister Imran Khan believes that regional peace is being put on stake. He said Indian steps reflect its unilateralism and is not serious in resolving issues through bilateralism. He said current Indian government is following its Hinduvta agenda.

Shah Mahmood Qureshi said due to efforts of Foreign Office this issue was brought to UN Security Council after a lapse of fifty years on 16th of August this year. Despite Indian attempts to block it, the issue was debated at the forum. He said on 12th of last month, he wrote a letter to UN Secretary General and President UN Security Council detailing the gravity of situation in occupied Kashmir. In the letter, both leaders were reminded that situation has aggravated after the 16th August meeting of the Security Council.

Shah Mahmood Qureshi said on 17th of this month, this issue was raised again at the UN Security Council with Chinese help to apprise the international community of prevalent situation in held territory. He said all fifteen members of UN Security Council participated in the briefing on Kashmir in which all human rights and ceasefire violations were discussed.

Minister Qureshi said during his latest meeting with US President Donald Trump, the Prime Minister raised the issue of Kashmir.

He said Prime Minister has decided to launch a detailed campaign and plan to sensitize the people in Pakistan and abroad on issue of Kashmir.

Responding to a question, he said the entire India stands against the citizenship amendment act that exposed the reality of so called secular and democratic India before the world community.

In response to another question, Shah Mahmood Qureshi said the whole nation is united to raise the case of innocent Kashmiris on every international forum.

Meanwhile, President Dr Arif Alvi will host an event today, at the Aiwan-e-Sadr on Kashmir to be attended by the diplomatic corps, the Radio Pakistan reported.

A series of activities had been planned on February 5, also annually observed as Kashmir Solidarity Day, including human chain in Azad Jammu and Kashmir.

The same day, the prime minister would address the members of the Kashmir Legislative Assembly in Muzaffarabad and address a public gathering in Mirpur.