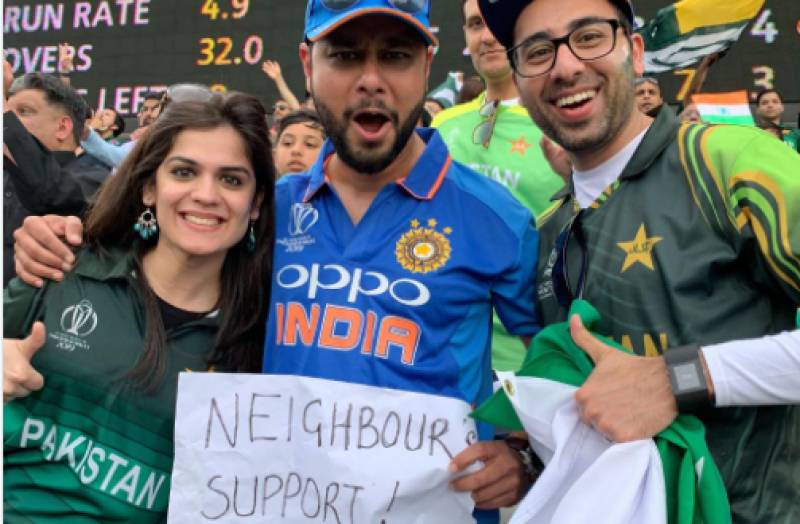 LONDON - On Pakistan vs South Africa clash on Sunday (yesterday), an Indian fan caught the attention of Pakistan supporters who were being lauded for cheering for ‘arch rival’ Pakistan.

A picture of the Indian fan surrounded by green all around has been making rounds on social media as he cheers alongside Pakistani fans for the team’s victory against Proteas on Sunday.

Posing with two Pakistan spectators, the fan donning the Indian jersey can be seen holding a placard that read: “Neighbours support! Come on Pakistan.”

The photo was also shared by ICC’s official twitter handle of the Cricket World Cup as they applauded the ‘Spirit of Cricket’.

Let's have a look at some of the comments on the heart-warming post by ICC:

LOVE YOU BRO😍😍😍😍 PEACE AND LOVE

Pakistani popular TV star Hamza Ali Abbasi also lauded the Indian fan for supporting Pakistani cricket team by thanking him in a tweet which included the picture of the Indian fan holding a play card with sweet captain written on it.

Pakistan and South Africa have locked horns in one of the crucial matches of the tournament, looking to rout the other as both teams stand on the edge of elimination from the ICC World Cup 2019.

Best wishes to the Pakistani cricket team for qualifying the semi-finals.