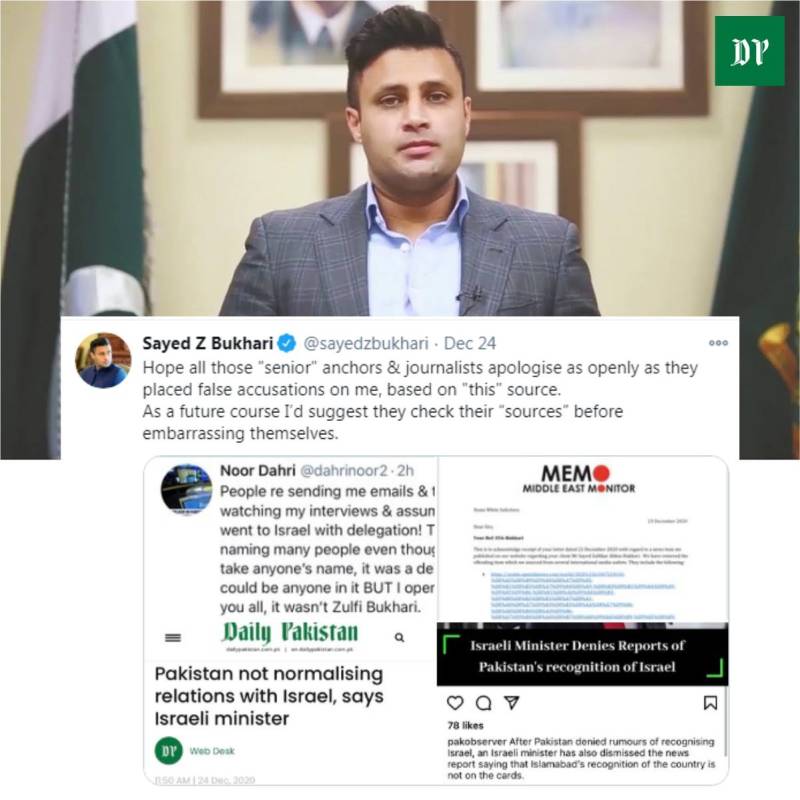 The apology by Middle East Monitor (MEM) follows the reports based on claims of Noor Dahri, the founder and executive director of UK based Islamic Theology of Counter-Terrorism (ITCT), who maintained that “a Pakistan delegation visited Tel Aviv for normalising ties”.

The MEM in the apology letter has clearly admitted publishing the false news. “We have removed the offending item,” it said in the letter, adding that it had been sourced from multiple foreign media organisations.

“We accept Mr Bukhari’s refutation of the claims made in the report and sincerely apologise for the inconvenience it has caused,” concluded the letter.

“Hope all those "senior" anchors & journalists apologise as openly as they placed false accusations on me, based on "this" source. As a future course I’d suggest they check their “sources” before embarrassing themselves,” Bukhari wrote in the tweet.

Hope all those "senior" anchors & journalists apologise as openly as they placed false accusations on me, based on "this" source.
As a future course I’d suggest they check their “sources” before embarrassing themselves. pic.twitter.com/g5XZ1ISEtU

He also shared the screenshots of stories in local media, including DailyPakistan, in which an Israeli minister himself rejected the reports of any Pakistani delegation visiting the Jewish state, as a sample for those who follow true standard of journalism.

Now, Dahri has also issued a clarification stating that Zulfi Bukhari was not in the delegations.

A statement from an Israeli cabinet member also helped debunking the claims that Islamabad is going to normalise ties with Tel Aviv.

Speaking to the Israeli news outlet Ynet TV, Regional Cooperation Minister OfirAkunishad acknowledged that there was a potential for two more countries to normalise ties with Israel. However, it clearly stated that these are not Pakistan and Saudi Arabia.

ISLAMABAD/TEL AVIV – An Israeli minister has denied the news report saying that Pak-Israel ties are not possible ...

Pakistan has categorically stated that it cannot accept Israel until a just solution to Palestine conflict.

The United Arab Emirates, Bahrain, Morocco and Sudan became the first four Arab states in a quarter of a century to agree to formal links with Israel.