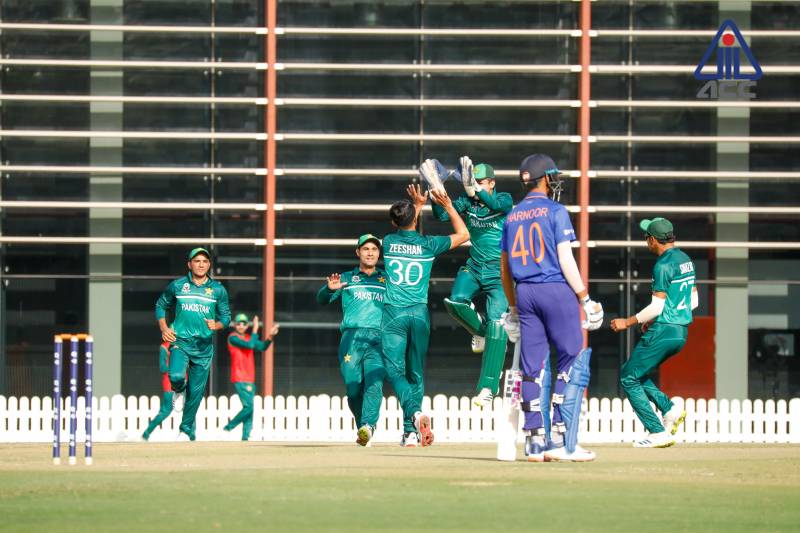 DUBAI – Pakistan won the nail-biting game on the last ball against India in a match of the U-19 Asia Cup on Saturday.

Team Pakistan surpassed the target of 238 runs on the last ball of the 50-over match.

Openers Abdul Wahid and Maaz Ahmed Sadaqat failed to build a strong opening stand as formed went for the duck and the latter made 29 runs.

PCB Chairman Ramiz Raja has felicitated the U-19 team on their win.

"Congrats young guns. Played a tremendous game and held your nerve to beat India," he wrote on Twitter.

Zeeshan Zameer played prominently with the ball as he bagged a five-wicket haul while conceding 60 runs in his 10 overs while Captain Qasim Akram takes the wicket of Kaushal Tambe – who scored 32 runs in 38 balls.

Rajvardhan Hangargekar scored 33 runs off 20 balls to give the innings much-needed impetus at the backend.

Maaz Ahmad Sadaqat breaks the 38-run partnership between Rajangad Bawa and Aaradhya Yadav by sending the former back to the pavilion. Bawa scored 25 runs in 59 balls, whereas Yadav is unbeaten on 24 runs off 52 balls.

The South Asian neighbors are part of group A in the tournament while the match is being played at ICC Academy Ground No 2 in Dubai.

Both sides will be looking to continue their winning streak in the event, after comprehensively notching up wins in their opening games.

Green Shirts earlier thrashed Afghan batting, dismissing them for only 52 runs, and won the match by four wickets on Thursday whereas India won their opening game against UAE by 154 runs.

Batting first in the match, India posted 282-5 on the board. Harnoor Singh slammed a marvelous century while skipper Yash Dhull scored 63. Later, team UAE was bowled out for 128 with Kai Smith scoring the highest 45.

Meanwhile, the winner of today’s game will give themselves a great chance to finish at the top of the table in Group A.

DUBAI – Pakistan on Thursday defeated Afghanistan U19 by four wickets in their opening match of the ACC U19 Asia ...

DUBAI – Pakistan will face India on March 6 for the Women’s ODI World Cup, according to the schedule ...