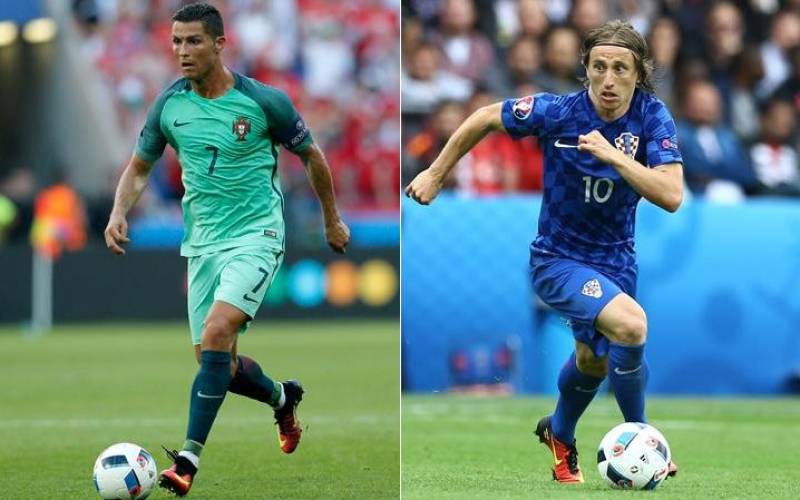 LENS (Web Desk) - Although Portugal managed to limp through to the next stages of the Euro cup on the back of Cristiano Ronaldo's heroic efforts, it faces an uphill task against a classy Croatia side that Portugal coach Fernando Santos has called “sharks.”

In its last clash against Hungary, Cristiano Ronaldo hit a double and saved his team from an embarrassing early exit in a thrilling 3-3 draw. However, Croatia is a bigger challenge for Portugal, even by the star player's own admission.

“Croatia are a tough team, with good players. Not every team manages to beat Spain.We respect them, but we know our strengths and we’ll look them in the eye when we face them.” he added.

Croatia will also be in a fighting spirits after key player Luka Modric recovered from injury, increasing his chances of his throwing down against Portugal. Mario Mandzukic is also likely to regain his place in the team, spelling a grim outlook for Ronaldo's team.

“Croatia are one of the sharks we had been trying to avoid, They placed first in a group with Spain, which tells you all you need to know about them,” admitted Portugal coach Fernando Santos.

Pressure is mounting on 31-year-old Ronaldo to brush aside Croatia in today's clash at the Stade Bollaert-Deleli.

Portugal reached the last 16 as one of the best third-placed teams after failing to beat Iceland, Austria and Hungary in Group F.