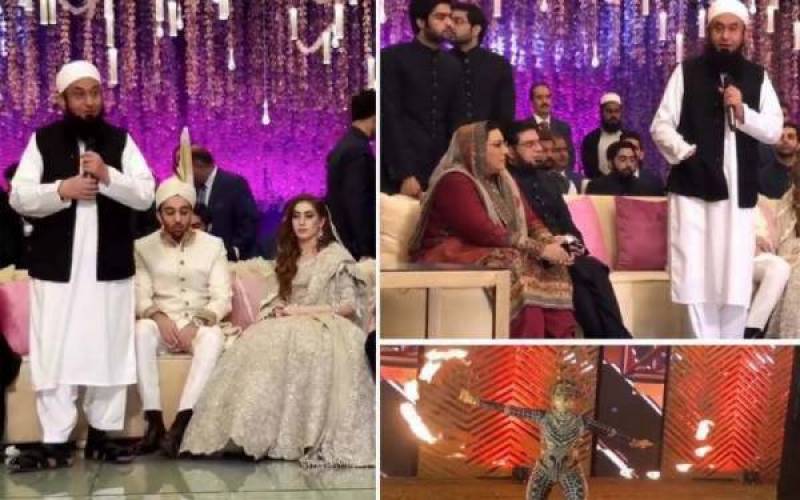 LAHORE – Amid criticism over Master Tiles and Jalal Sons’ lavish wedding, renowned Islamic preacher Maulana Tariq Jameel, who had also attended the function, has come forward to share details about expenditure incurred on the wedding ceremony.

Maulana Tariq Jameel disclosed the details in a voice message he issued in response to a reaction of Indian religious scholar Sheikh Khalilur Rehman Sajjad Naumani on the rich function and media reports.

Naumani in his reaction had said that Rs2 billion were spent on a wedding in Pakistan and termed it extravagant and waste of money.

The Pakistani scholar said that when he investigated the matter after reports of Rs2 billion expenditure, he found that only Rs100 million were spent.

The religious scholar also rubbished the reports about taking Rs1 million for solemnizing nikkah of children of the business tycoons.

Jameel revealed that he had gone to the function because of old relationship.

Earlier this month, the Federal Board of Revenue (FBR) issued initial investigation report of massive spending on the most expensive wedding ceremony ever in the country.

In the rich event that caught the attention of most of the public, Unzila Mehmood, daughter of Master Tiles owner, had tied the knot with Jalal Sons owner’s son.

Chief Commission Inland Revenue Amina Hassan has sent a report to member operations of the FBR with details of expenditures to the tune of Rs2 billion on the wedding.

LAHORE- Celebrating a lifelong commitment, weddings are a once-in-a-lifetime event for a couple. And sometimes ...

Renowned singer Rahat Fateh Ali Khan was given Rs5.5 million for his performance on the report, the report said, adding that Rs5 million were paid to Atif Aslam for enthralling the participants of the event.

The report revealed that Rs150 million were paid to Rosa Blanca Country Club for arranging the barat event while two event managers were given Rs40 million in the wake of fee.

For floral arrangements, the business tycoons paid Rs10 million to Sundas Mustafa while those who arranged decoration on Walima day were given Rs10 million.