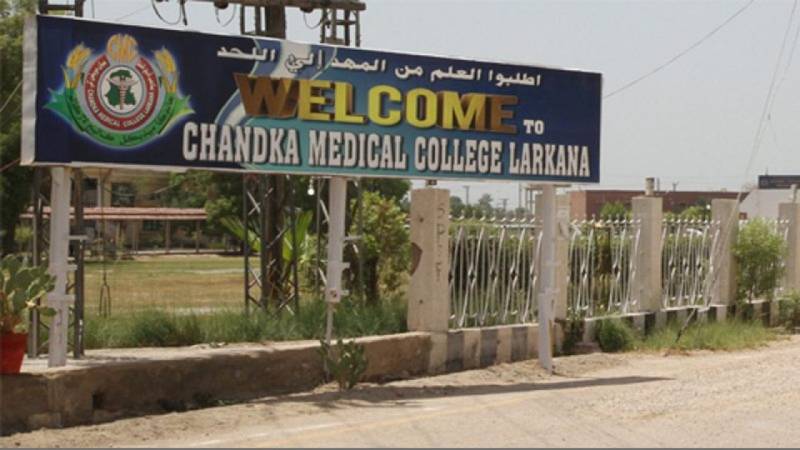 KARACHI – A female medical student was found hanging from a ceiling fan in the hostel of Chandka Medical College, Larkana, under suspicious circumstances.

Police said that the door of her room was broken after she did not respond to the calls, and she was found dead inside it.

The girl named Nosheen Kazmir, who was a fourth-year medical student, was a resident of Dadu.

An investigation has been launched to ascertain where she had committed the suicide or it is a murder case.

Chandka Medical College Principal Gulzar Sheikh that the administration has also formed an inquiry committee into the matter.

Meanwhile, CMC students today (Thursday) staged a protest, demanding a transparent probe into the death of their fellow.

They accused the college administration of trying to declare the incident as a suicide case in order to save the reputation of the institutions. They are calling it a “murder case”.

A protest rally was organized by the Students Action Committee and PrSF from Chandka Medical College to Press club larkana. In which the President of PrSF larkana Dr Imran Buriro said that the administration has been calling it a suicide since yesterday,#JusticeForNosheenKazmi pic.twitter.com/xhboBCbWfG

A student’s organisation said that this is the third case reported at the CMC hostels in the past few years, raising fingers towards the administration of the institution. Earlier, Naila Rind and Nimarta Kumari had been found dead in their hostel rooms.

A student of CMC Larkana Nosheen Kazmi was found dead today at her hostel room.

This is the third case reported at the CMC hostels in the past few years.@JamiatPk demands an immediate investigation on the cases and the report must be made public.#JusticeForNosheenKazmi

The incident has created a storm on Twitter where social media users are calling for ‘Justice for Nosheen Kazmi’ and it has now become a trend.

Why are these medical student hostels causing their death?
Girls committing suicide yet no transparent investigation can be punished if the reasons behind Nimrita Kumari's suicide are found today another daughter does not commit suicide.@PakPMO#JusticeForNosheenKazmi pic.twitter.com/yXRFB2u5gr

The parents send the girls to study & dead bodies r returned to their parents. After Naila & Nimrata,Noshin's parents have been given the body. Patriarchal society does not support girls' education. Does this system also exist in educational institutions? #JusticeForNosheenKazmi pic.twitter.com/z0qAC6y6kT

The father of Nosheen Kazmi has also called for a transparent investigation, saying his daughter "cannot commit suicide."