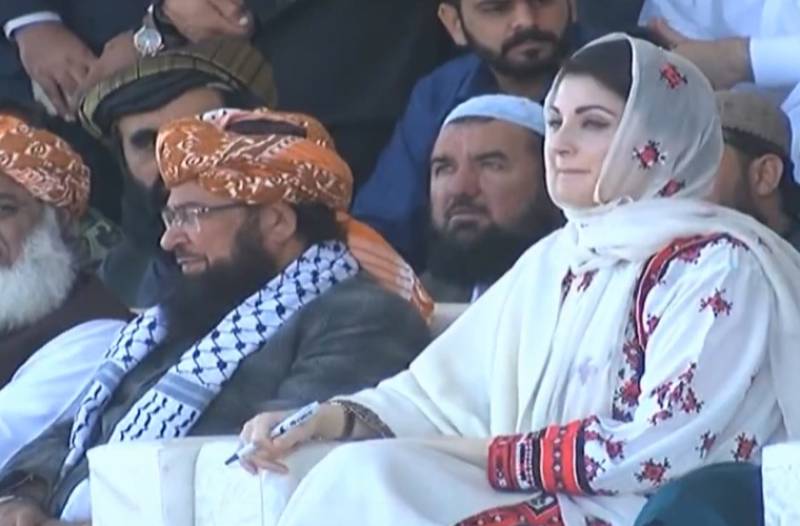 QUETTA – The Opposition's Pakistan Democratic Movement (PDM) on Sunday kicked off its third power show in the Balochistan capital amid heightened security measures owing to a threat alert issued by the National Counter Terrorism Authority (NACTA).

The public gathering is being held at the Ayub Stadium in Quetta. PDM leaders including JUI-F chief Maulana Fazlur Rehman and PML-N vice president Maryam Nawaz have already arrived in the city to partake in today's jalsa.

"I love the people of Balochistan more than the people of Punjab," she said, speaking of her intentions behind donning a traditional Balochi dress.

Maryam stressed that the people of Balochistan have just as much a right to elect their own representatives as anyone else in the country.

PPP chairman Bilawal Bhutto Zardari addressed the jalsa via a video link from Shigar area of Gilgit-Baltistan, where he is busy in electioneering.

Bilawal said that his party will not part ways with the opposition alliance, PDM come what may, adding that those who are conspiring against it will only face disappointment in this connection.

“Those who are dreaming of breaking the opposition alliance will never succeed… we are not among those who back down from their stance,” he added.

People of Balochistan, Bilawal said, despite having abundance of natural resources including gas and gold mines living in a miserable condition. “People of Balochistan are brave and they know how to get their rights. What kind of democracy is this where no one including judiciary, media and people are not free.”

Bilawal said people all across the country wanted freedom from poverty, unemployment and are demanding to restore the genuine democracy in the country.

QUETTA – At least seven people were killed and several injured on Sunday in a blast within limits of Shalkot ...

Earlier, the Balochistan government had requested the PDM to delay its Quetta jalsa in light of the recent terror threat.

"Terrorists are targeting political leadership in Balochistan," Liaquat Shahwani, the Balochistan government spokesperson, had said during a news conference.

NACTA had said that the TTP aims to target religious and political parties in bomb attacks and suicide bombings in Peshawar and Quetta.