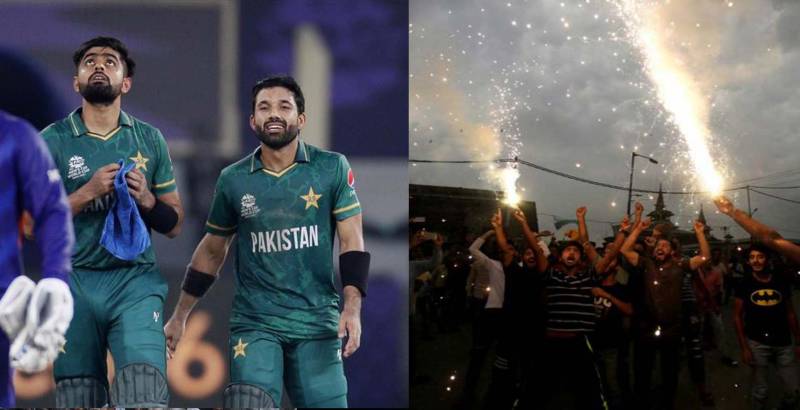 The revelry was held in parts of Kashmir which are administered by the neighboring country with draconian laws and contingents of armed forces. Cricket fans in Srinagar, the largest city of Jammu and Kashmir, burst crackers and shouted pro-Pakistan and pro-independence slogans after Babar Azam-led Shaheens thrashed Men in Blue in a one-sided match victory.

Kashmiris took to the streets in the caged valley and chanted Pakistan Zindabad, Pakistan meri jan, and Allah o Akbar to express high spirits over the rare win.

Celebrations at both sides of the Line of Control are a statement in themself. #Kashmir #PakvsIndia #MaukaMauka pic.twitter.com/QghMK0xC8O

Some of the video clips featured Kashmiris waving the Pakistani flags on the streets. The celebrations, studded with fireworks, showcased the loyalties and love of Kashmiris for Pakistan.

Meanwhile, the celebrations of Pakistani fans after their first World Cup victory over arch-rivals India is also a joy to watch. Firecrackers, bursts of gunfire have rung out across the South Asian country shortly after Pakistani Skipper and his partner sealed a crushing win in Dubai.

Kohli led Men in Blue went into the game with a 12-0 record in World Cups against Pakistan but Shaheens snapped that streak with a 10-wicket romp.

Azam scored a 52-ball 68 not out while Rizwan hit an undefeated 55-ball 79 comfortably chasing down their target of 152. The loss was also India's first 10-wicket defeat in Twenty20 cricket.