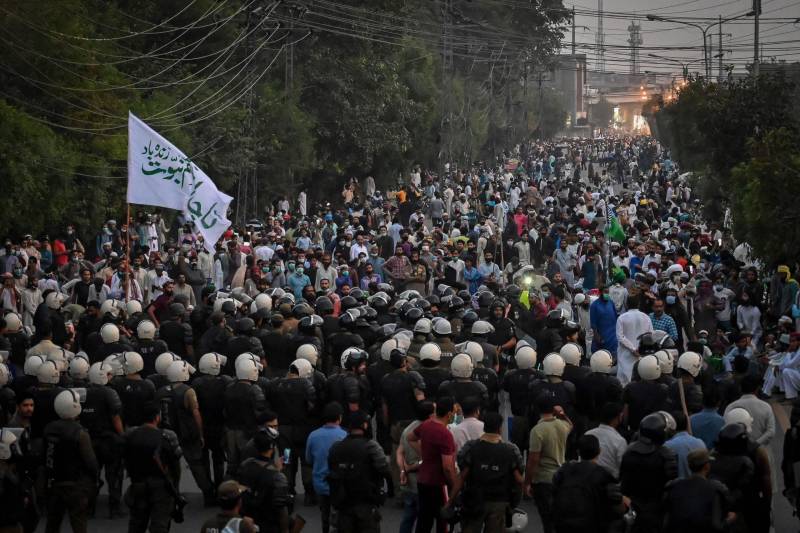 ISLAMABAD – The federal government on Sunday released at least 350 activists of Tehreek-i-Labbaik Pakistan (TLP) following a partially 'successful dialogue' with the leadership of the outlawed outfit.

Interior Minister Sheikh Rashid Ahmed shared the development on his official handle after he came to the Punjab capital after ending his Dubai tour. The peace talks with the banned party were almost ‘complete’, he said.

Reports in local media cited that the officials assured TLP leaders of reviewing the Fourth Schedule list which includes their names. The release of detained Saad Rizvi was also discussed during the peace talks, Rashid said during a presser on Sunday.

The second round of talks with TLP leaders will be held today at the Ministry of Interior. The Shura members of TLP claimed that the government officials had sought time till the return of Prime Minister Imran Khan who is on an official visit to Saudi Arabia.

Reports quoting TLP Shura members said they agreed to the government’s proposal to wait for two days, as Interior Minister assured the release of Saad Rizvi along with other detained members. The officials reportedly promised to act on the agreement signed in November last year.

ISLAMABAD – Tensions started to ease out as the talks between the government and outlawed Tehreek-e-Labbaik ...

Meanwhile, Islamabad and Rawalpindi administrations were directed to remove all the containers placed at the entry and exit points of the twin cities.

Earlier, the Lahore police registered a case against 23 officer-bearers and 200 other members of the TLP on different charges including terrorism, attacking a police check-post, and snatching weapons and mobile phones. The case was registered under the Anti-Terrorism Act, Maintenance of Public Order, and Pakistan Penal Code.

The TLP is protesting against the incarceration of its top leader Saad Rizvi and is seeking the expulsion of the French ambassador over caricatures of Prophet Muhammad (PBUH) that were published in France last year.

ISLAMABAD – Rangers and Frontier Constabulary (FC) personnel have been deployed in the country’s federal ...