Fatima Sughra, the lady who pulled down Union Jack from Civil Secretariat Lahore in 1947, passes away

Lahore - Fatima Sughra, a forgotten female heroic figure of Pakistan Independence movement, passed away on Sunday night. Her Namaz e Janaza will be held in Johar town after Zohar Prayer and will be buried in Miani Sahib graveyard. Mrs. Sughra, at the time of her departure, was 86 years old.

Fatima Sughra, at the age of 14 years old, pulled down Union Jack from Civil secretariat Lahore and replaced it with the green flag of Muslim League. This courageous act of hoisting of Muslim League flag on Civil Secretariat gate is a golden chapter of national history. 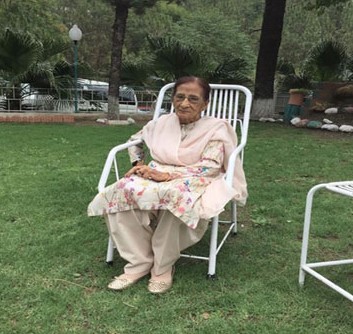 Mrs. Sughra's act and participation in Independence Movement are matchless. A young girl pledging her alliances and standing against the government isn't something we get to hear about every day. According to her own account, "When I took down the British flag and replaced it with our Muslim League one, I don't think I really knew what I was doing. It wasn't planned. I was rebellious at that age, 14, and it seemed like a good idea. I was not prepared for it to become such a big symbol of independence. They even gave me a Gold Medal for Services to Pakistan. I was the first ever to receive one". (The Guardian, 2007)

Fatima Sughra's rebellion came from the painful turn of events in sub-continent. She was born in Walled City, Lahore, where Hindus, Muslims and Sikhs lived in peace and harmony until the civil disobedience movement started in 1946. She witnessed the terror and torture at the time and thought of doing something which will leave a mark.

The rebellious act of a young girl against the then government became a symbol of independence. In recognition of her services towards the Independence Movement, she was awarded a gold medal and Life Achievement Award by Pakistan Movements Workers Trust and Government of Pakistan, respectively.