WILL YOU BE MY VICTIM? US teen wears ‘bomb’ to ask date to prom 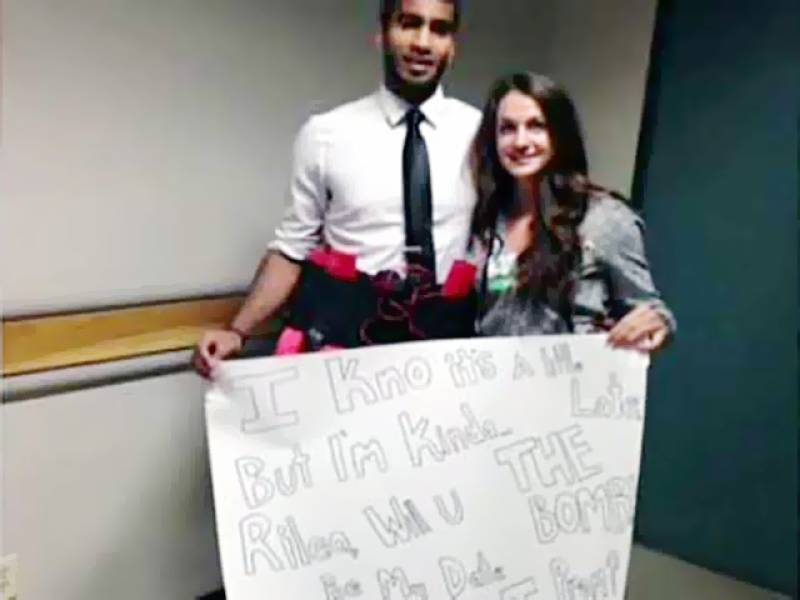 WASHINGTON (Web Desk) - A high school student in the United States has been suspended after strapping a fake bomb to his waist for his "promposal".

Ibrahim Ahmad wore the mocked-up suicide belt in a bid to win a date with classmate Rilea Wilson in the state of Washington.

The 18-year-old was suspended for five days from the school in the town of La Center after he stood up on a stage in the cafeteria with the fake vest and held up a sign that read: “I know it’s a little late, but I’m kinda… THE BOMB!”

The stunt apparently led to panic until school authorities realised that Ahman was just wearing a paintball vest filled with red paper tubes attached to wires.

He will now not be able to attend the event despite Ms Wilson agreeing to be his date to the prom.

Speaking to the Columbian, Ahmad said: “I’m Middle Eastern, and I thought the bomb was kind of funny and clever.

“I wasn’t wearing the vest for more than, like, 20 seconds. I asked her, took a picture, took it off, and then the school got upset.”

However Mark Mansell, superintendent of the school district, said that the student’s actions had shown “blatant disrespect”.

“Given the way the world is today and school safety, even if one parent or one student was upset about this, it causes issues,” he told the Columbian.

Ibrahim says that, rather than going to prom, he will probably just take Rilea on a dinner date.

The extent of Ahmad’s “promposal” conveys the extreme lengths that American teenagers are going to in order to try and secure a date to celebrated high school event.

A study earlier this week by Visa on teenagers’ credit card spending found the average prom costs $919 (£607) per couple, with $324 going towards the proposal itself.