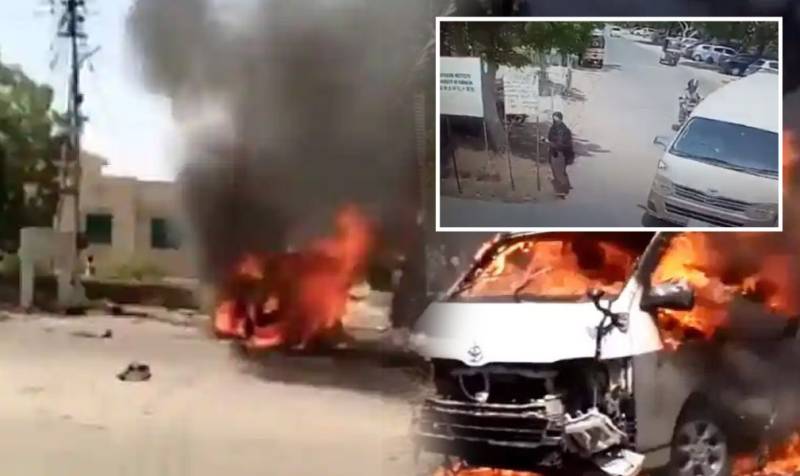 KARACHI – A video captured by CCTV camera shows a woman suicide bomber who blew herself up close to the van of Chinese nationals, killing at least four near varsity’s Confucius Institute.

A white coloured medium-sized vehicle can be seen coming towards Karachi University while Rangers personnel were spotted escorting the van.

As the van girl moved right to enter KU’s Confucius Institute, the woman standing outside the department detonated the explosives, causing a powerful blast. The huge blast partially damaged the vehicle which can be seen blazing in more clips shot by passersby.

The dead include director of the Chinese-built Confucius Institute, which offers Chinese language graduate classes, and two lecturers. A Pakistani driver of the van was also killed in the terror incident.

A militant group Baloch Liberation Army has claimed responsibility for the blast, releasing a photo of the suicide bomber. It also confirmed that it was the first attack carried out by a female bomber.

KARACHI – At least four people including three Chinese nationals were killed and several others sustained ...

The group previously targeted Chinese nationals on a number of occasions. Last year, at least 13 people, including nine Chinese nationals were killed in a blast that sent a bus hurtling down a mountainside near the Kohistan region.