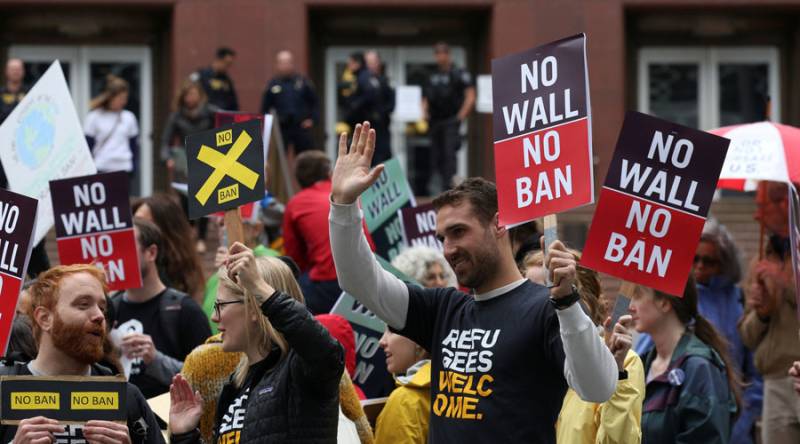 WASHINGTON - The US Supreme Court will hear arguments about President Donald Trump's proposed travel ban against foreign nationals from six majority-Muslim countries in their next term. In the meantime, people with no relationship with the US won't be able to enter.

The case will be heard "during the first session of October Term 2017,” as the government “has not requested that we expedite consideration of the merits to a greater extent,” the court said.

Foreign nationals from Iran, Libya, Somalia, Sudan, Syria and Yemen who have a "bona fiderelationship" with the United States ‒ such as a relative or a work or educational opportunity ‒ will still be able to enter the country.

A "bona fide relationship" would mean “a close familial relationship” to qualify for the exemption, the court said. “As for entities, the relationship must be formal, documented, and formed in the ordinary course, rather than for the purpose of evading” the executive order. Such an entity could be an educational institution or a business that is hiring the foreign citizen.

Justice Clarence Thomas dissented in part, noting that he would grant the government’s request in its entirety and objecting to the court “keeping the injunctions in place with regard to an unidentified, unnamed group of foreign nationals abroad.”

The compromise will invite “a flood of litigation until this case is finally resolved on the merits,” Thomas wrote. His dissent was joined by two of his fellow conservatives on the bench, Justices Samuel Alito and Neil Gorsuch, who was appointed by Trump earlier this year.

The justices will hear arguments about the second iteration of Trump’s travel ban, which was issued in early March, after the first, harsher version was put on hold by multiple courts. The second executive order, which Trump has complained was “watered down,” was set to go into effect on March 16 for a 90-day review period, but was halted before that could happen.