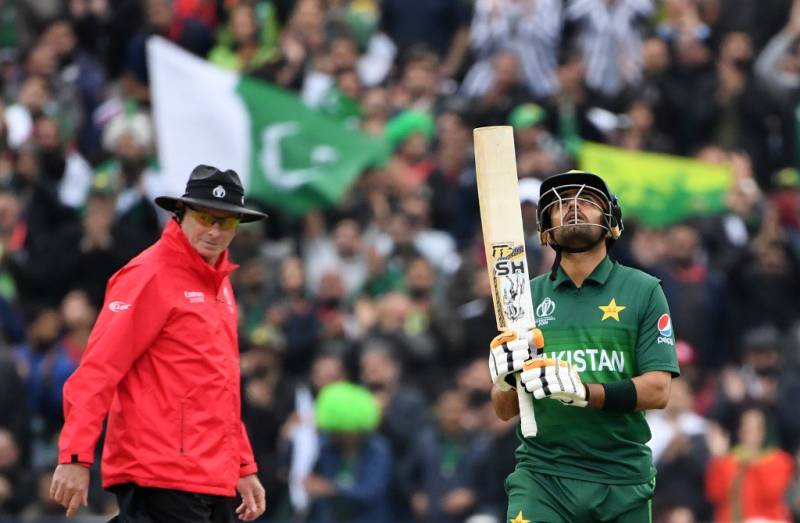 BIRMINGHAM - Pakistan brushed aside New Zealand in all-important encounter of ICC World Cup 2019 in Birmingham by six wickets on Wednesday.

Kiwis posted a target of 238 runs in 50 overs as James Neesham scored 97 runs while Colin de Grandhomme contributed 64 to the total; Shaheen Afridi took 3 wickets while Aamir and Shadab Khan sent one batsman each to the pavilion.

In response, Pakistan clinched the target in the last over as Babar Azam scored a century while Haris Sohail contributed 68. Babar Azam was declared Player of the Match.

On the other hand, Kane Williamson, Trent Boult and Lockie Ferguson took one wicket each.

Congratulations to our cricket team for a great comeback. Congratulations especially go to Babar, Haris and Shaheen for their brilliant performances.

Pakistan now stand at 6th spot with 7 points in hand on the table.

The toss has been delayed in Birmingham. There will be an inspection at 10:30am local time. #CWC19 | #NZvPAK pic.twitter.com/ZvwiuRo6hq

According to pitch inspection, now match will start at 03:30pm (PST).

These Pakistan fans have arrived at Edgbaston in some style ? #CWC19 | #NZvPAK pic.twitter.com/k299lpxmyk

Overnight rain had left the outfield wet and there will be another inspection at 11:30 am before taking a final decision on when to start the match.

Unbeaten New Zealand are second on the 10-team table with 11 points, winning five matches and one no result while Pakistan are seventh with just two wins, three defeats and a no result.