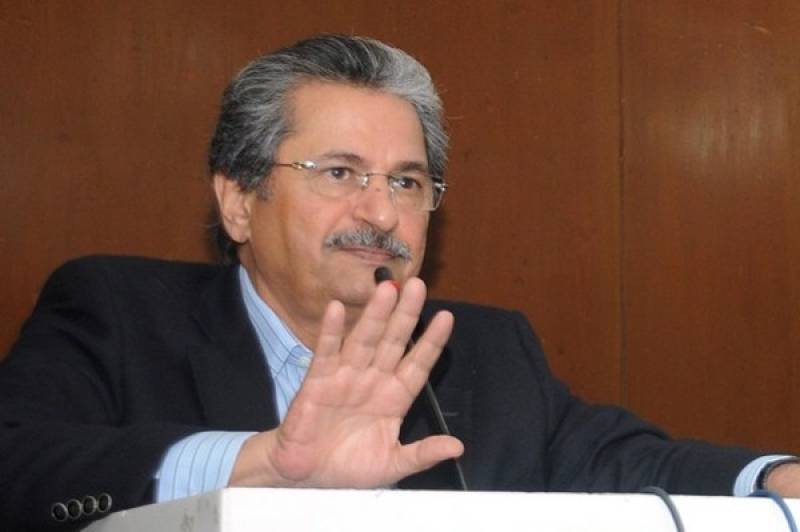 ISLAMABAD - Minister for Federal Education and Professional Training Shafqat Mahmood Friday said the government has all set to introduce Radio Schools and E-Taleem Portal in the next month.

He expressed these views while talking to a delegation of Insaf Students Federation (ISF) which met him at his office to discuss the education-related issues.

Shafqat Mahmood informed the delegation that the education ministry was making efforts on an urgent basis to provide access to students to internet facility with an increase in speed.

A committee, in that regard, had been established under the chairmanship of Additional Secretary Education Mohiuddin Ahmadwani, he added.

The minister said that around eight million students were taking benefit from the Teleschool project. He said the pandemic has severely affected all the sectors of life; however, all-out efforts would be made to continue the educational activities at any cost.

The students, he said, were being promoted in next classes as per the decision of the National Coordination Committee (NCC). The directions had also been issued to the federal board in that regard, he said.

He informed that the results of Secondary School Certificate (SSC) and Intermediate would be announced in the first and third week of July respectively.

The provinces, he said, would also make their announcements in the light of NCC decision and there was no ambiguity in that regard.

The ISF delegation requested the education minister that online lectures should be uploaded on YouTube so that such areas having lack of internet facility on an urgent basis, could take the benefit from it. Shafqat Mahmood agreed upon the suggestion and directed the officials concerned to take necessary measures to ensure the provision of the facility.