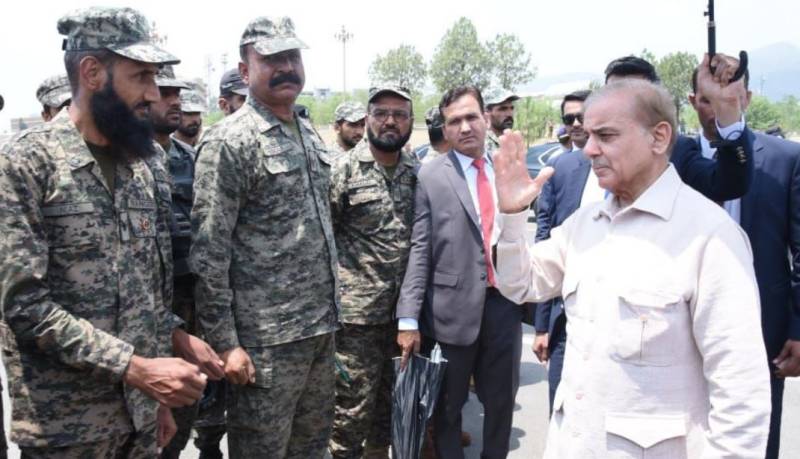 ISLAMABAD – Prime Minister Shehbaz Sharif on Thursday meets law enforcement personnel, who were deployed in the Red Zone to ensure law and order during the PTI's long march.

During a brief interaction, the premier hailed Rangers, Islamabad Police, and the capital’s traffic police for rendering their duties professionally and protecting the lives and property of the populace.

Sharif stepped out to greet security personnel who were serving at D-Chowk in the capital, where PTI chairman Imran announced to hold a sit-in.

On his way to National Assembly, Prime Minister Shehbaz Sharif stops by D-Chowk to appreciate the efforts of Police, Rangers, Administration and other law enforcing agencies in maintaining law & order & protecting lives & properties of the public despite all odds. pic.twitter.com/0ZoMmC4wCY

Speaking with personnel of law enforcement agencies, the PML-N leader said all of us have to end hostilities and hatred, promote love, passion, and national cohesion. Pakistan will definitely move forward if we follow the law and the constitution, he maintained.

He added that they have to foil the conspiracy to divide the nation and make best efforts to put Pakistan on the path of development and prosperity.

Minister for Interior Rana Sanaullah also paid tribute to the Rangers and Islamabad Police personnel for ensuring the protection of lives and property of the masses.

The security czar said that he personally monitored the entire situation throughout the night, adding that former PM Imran Khan violated the court orders under which Pakistan Tehreek-e- Insaf (PTI) granted permission to organize a public meeting at the designated place.