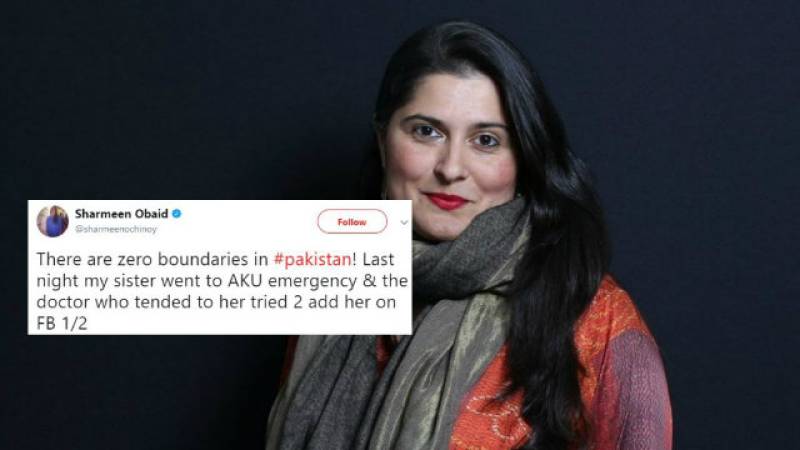 KARACHI - A physician who tended to the sister of Emmy award-winning filmmaker Sharmeen Obaid at a Karachi hospital, has been fired from his job for “disregarding his ethical values and showing unprofessional behaviour”.

The doctor’s dismissal comes days after Mahjabeen Obaid, the sister of Pakistan’s first Academy Award winner, visited the Aga Khan University Hospital (AKUH), Karachi for her treatment. After a while, she received a friend request from the same doctor.

Unfortunately the doctor messed with the wrong women in the wrong family and I will definitely report him! Harassment has 2 stop!

In a series of tweets, she said: “There are zero boundaries in #pakistan! Last night my sister went to AKU emergency & the doctor who tended to her tried 2 add her on FB 1/2"

“I don’t quite understand how doctor tending 2 emergency patients thinks it’s ok to take a female patient info & add her on FB! 2/2 unethical”

There are zero boundaries in #pakistan! Last night my sister went to AKU emergency & the doctor who tended to her tried 2 add her on FB 1/2

I don't quite understand how doctor tending 2 emergency patients thinks it's ok to take a female patient info & add her on FB! 2/2 unethical

Days after the Saving Face director, who is believed to be very influential in her hometown from where the fuss started, raised her voice against the doctor, it is reported that the medical practitioner, a father of four, has been kicked out from the hospital.

While it is quite clear that trying to connect with someone on social media doesn’t come under the charges of harassment, it is still unethical for a medical expert going through the medical records of his patient and approach her outside. 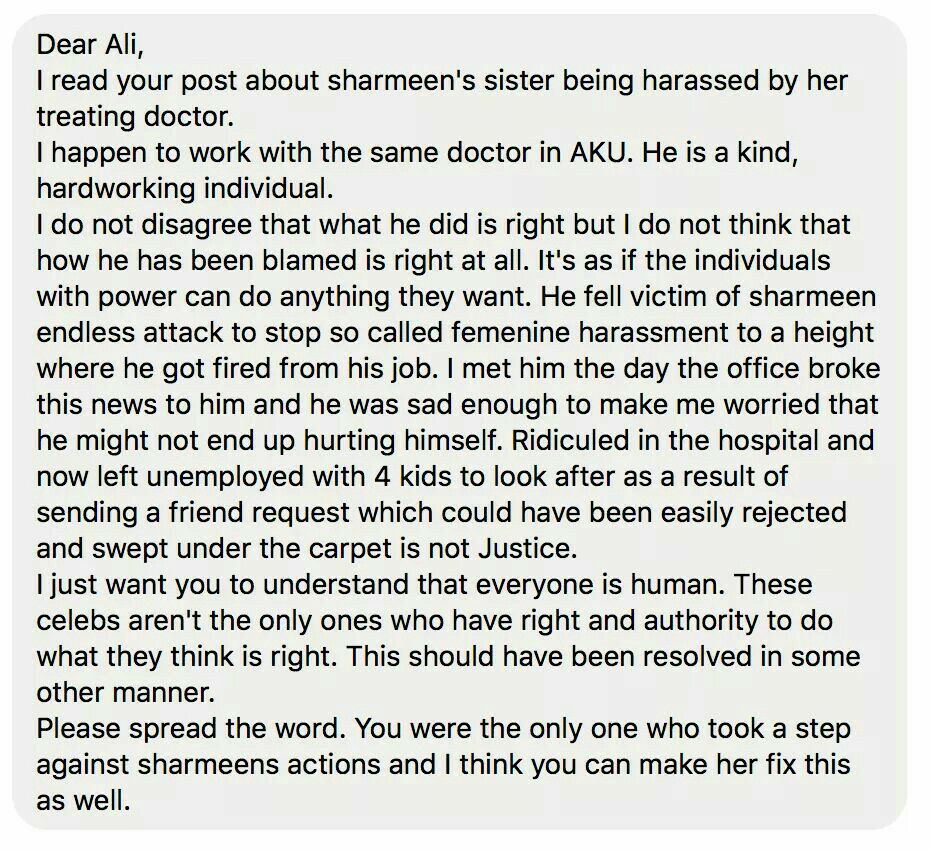 For some it might be normal as it was “just a friend request”, while majority of the netizens criticised the documentary maker for the way she highlighted the issue.

It is indeed very unethical but I dont think you should categorize that as harassment. It was just a friend request tbh.

Lady! There is hell of a diff btw 'Harassment' and 'Unethical' and this incident comes under Unethical practise.

If a woman is made uncomfortable THAT IS harassment! If some1 gets info from patient's file & seeks her out on Social media, THTS STALKING!

U can shake hands with males without fear and yet frightened by just a friend request from doctor...have a heart

Some even tried to be sarcastic:

You must be grateful to the doctor as he gave you really good stuff for next documentary. "A Girl in the Ward"

There were also a few patriotic Pakistanis, who lambasted Sharmeen for defaming the country:

Why are you bashing Pakistan ? Bash that doctor but not the whole country for god’s sake.

U never miss any chance to humiliate Pak... Frindship does in all over the world b/w girl & boy.. Lot of proposals are made inclding mariage

Nonetheless, the family did find some support as well.

More power to you.

I’m sure it will be investigated thoroughly. But the threat is implied. Doctor is in a position of dominance. Patients are at their mercy.

Hope she's better and it isn't serious. This constant predatory behavior is a major problem in our society.

Well , the doctor shouldn't had done that at first place !!! It agaisnt patient privacy. If in states you can sue him for this