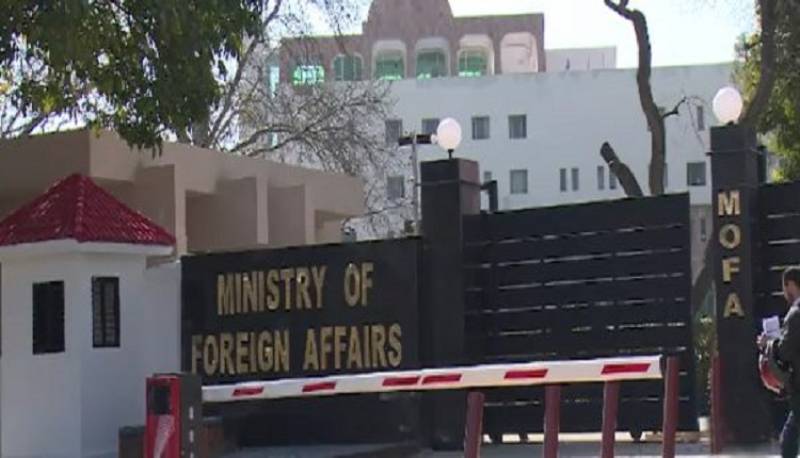 The Foreign Office handed over a dossier to the French envoy and clarified that no one would be allowed to hurt the emotions of the Muslims across the globe.

Pakistan had earlier termed it as “systematic Islamophobic campaign” in the guise of freedom of expression.

The Foreign Office strongly condemned the blasphemous caricatures and said that it was an attack on Islam. Certain irresponsible elements in some developed countries were involved in hurting sentiments of Muslims, said the FO, making it clear that desecration of Holy Quran and blasphemy of Prophet Peace Be Upon would never be tolerated.

It said that the statements of certain politicians who backed publication of blasphemous caricatures had further damaged the situation. The FO Said that it was extremely unfortunate that certain politicians were equating islam with terrorism, for narrow electoral and political gains.

ISLAMABAD – Pakistan condemns in the strongest manner the systematic resurgence of blasphemous acts of ...

“Freedom of expression is not an absolute right and it also carries special duties and responsibilities,” said the FO, pointing out that hurting others’ feeling was not allowed in universal values of the world.

The Foreign Office said dissemination of racist ideas, defamation and ridiculing of other religions, denigration of religious personalities, hate speech, and incitement to violence are not allowed expressions of this fundamental freedom.

It said such illegal and Islamophobic acts fanning inter-religious hatred, hostility and confrontation, are the very basis of horrendous terrorist acts like Christ Church, thereby imperiling future prospects of peace and harmony among civilizations.

Despite that there were anti-blasphemy and criminal laws for sensitive issues such as denial of Holocaust, the justification by a few politicians in some Western countries for insulting sentiments of Muslims, was nothing but a blatant reflection of double standards. Such justifications seriously exposed their human rights credentials, it added.

ISLAMABAD – Prime Minister Imran Khan on Sunday wrote to Mark Zuckerberg, CEO of Facebook, asking for the firm to ...