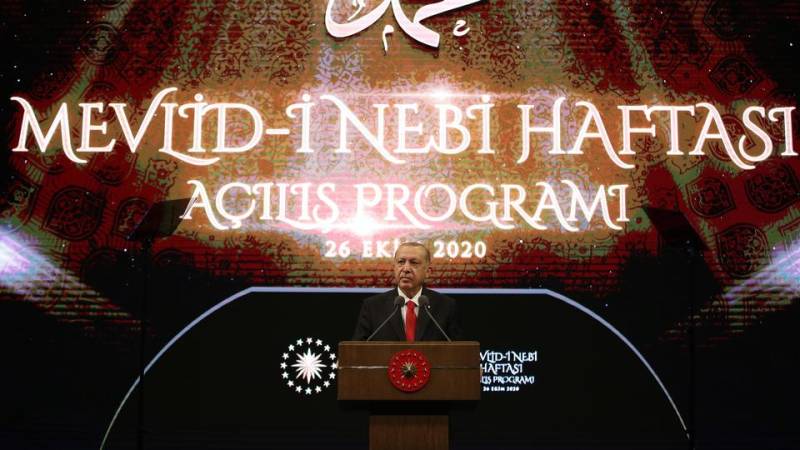 ANKARA – In another blow to France, Turkish President Recep Tayyip Erdogan has urged people to boycott the French products after his counterpart Emmanuel Macron’s anti-Islam statement and defence of blasphemous cartoons.

He stated this while addressing the opening ceremony of a week in the capital Ankara honouring the birth of the Prophet Muhammad.

Erdogan said, “I urge our people to never buy goods of France”.

He also said that European leaders should play their role to stop the hate campaign launched by the French president. He for the third time repeated that Macron needed mental treatment, a statement after which France called back its envoy last week.

He also urged the world leaders to come forward for protection of Muslim if there is persecution in France.

On Sunday, Erdoğan said that his French counterpart needs “mental treatment” over his attitude towards Muslims and Islam.

“Outrage and insult are not a method,” Macron’s office responds.

The French leader this month declared war on “Islamist separatism”, which he believes is taking over some Muslim communities in France. He also declared to not give up from the publication of blasphemous caricatures.

His comments came in response to the beheading of a teacher, Samuel Paty, a 47-year-old teacher, who was attacked on his way home from the junior high school where he taught in Conflans-Sainte-Honorine, 40 kilometres northwest of Paris.

The teacher had shown cartoons disrespecting Holy Prophet Muhammad (PBUH) in the class.

Millions of people on social media have condemned French government and its head Emmanuel Macron for attacking Islam and called for boycotting the French products.