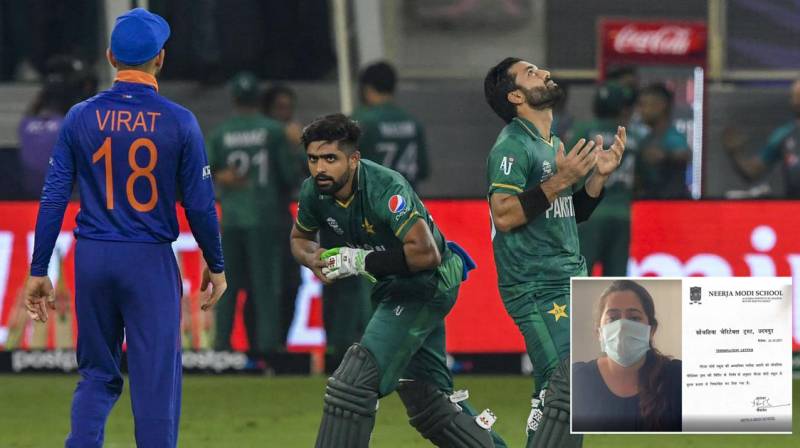 NEW DELHI – A woman teacher of a private school in the Indian state of Rajasthan was terminated from service after she cheered for Pakistan during Sunday's match against India in the T20 World Cup.

The Kashmir Media Service said quoting sources that action was taken after teacher Nafisa Attari shared a status on the instant messaging application WhatsApp, expressing her joy over Pakistan’s historic win in the high octane clash with India.

Following the ‘pro-Pakistan' statuses, a parent approached Attari and asked her if she supports the neighbouring country and she said yes.

Later, screenshots of Nafisa's statuses were made viral on social media. “Jeet Gaye, we won,” she wrote while sharing pictures of Pakistani players.

In consequence, the administration of Neerja Modi School terminated her services, depicting extremism in the so-called ‘secular’ state.

“Nafisa Atari, teacher at Neerja Modi School, was been terminated from the school with immediate effect during a meeting of Sojatia Charitable Trust,” the notice written in Hindi reads. It did not mention the reason for termination however.

Meanwhile, the irate teacher cleared the air, saying the entire event has taken out of context. My family was divided into two teams and I shared the statuses after my family lost the bet, she maintained.

The event is not the first that happened after Men in Green defeated the Kohli-led squad in the match. Earlier, Kashmiri students were assaulted and booked for celebrating Pakistan’s victory.

After Indian cricket team's defeat in Sunday’s match, there were celebrations in the disputed territory over Pakistan’s first-ever win against India in a World Cup.

Indian pacer Mohammad Shami was subjected to abuse. The 31-year-old became a target after the defeat despite the fact that the Indian skipper admitted his team was “outplayed”.

Shaheens thrashed India with a 10-wicket victory in the fixture held in the UAE on Sunday night.