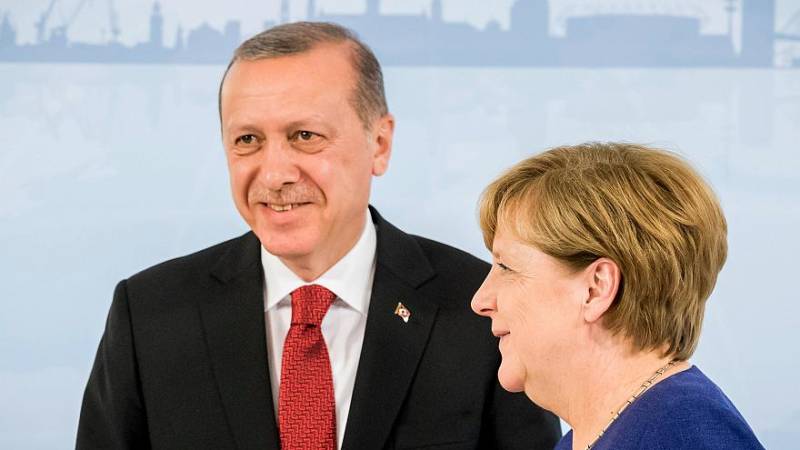 ANKARA - Turkish President Recep Tayyip Erdogan will pay a state visit to Germany this week as the two countries seek to rebuild ties after a series of sharp spats but the controversial trip is likely to be overshadowed by protests.

It will be Erdogan's first official visit to Germany since becoming president in 2014, and follows a prolonged bout of tensions sparked by Berlin's criticism of his crackdown on opponents in the wake of a failed 2016 coup.

"The main goal of this visit is to completely leave behind this period (of tensions)," Erdogan told Turkish media.

The Turkish leader will land in Berlin Thursday and hold talks with Chancellor Angela Merkel over the following two days.

German President Frank-Walter Steinmeier will welcome him with military honours and a state dinner at Bellevue Palace on Friday, which several opposition politicians have vowed to boycott. Merkel too will be notably absent.

On Saturday, Erdogan will travel to Cologne to open one of Europe's largest mosques, commissioned by the Turkish-controlled Ditib organisation.

Commentators have been quick to point out that Erdogan's push for a fresh start comes as the Turkish economy is struggling and relations with the United States have worsened.

Thousands of Erdogan critics have vowed to take to the streets across Germany to protest everything from Turkey's record on human rights and press freedom to its offensive against Kurdish militia in Syria.

Some 10,000 people are expected to rally under the motto "Erdogan Not Welcome" in Berlin on Friday alone.

With no shortage of political and economic issues hanging over the visit, the shadow of football also looms large.

Turkey and Germany are locked in a bitter race to host the Euro 2024 tournament, with the winner to be announced the day Erdogan arrives.

Germany's bid has been clouded by Turkish-origin player Mesut Ozil's resignation from the national team over perceived racism -- a move praised by Erdogan.

Relations between the two NATO countries plummeted after Turkish authorities arrested tens of thousands of people in a mass purge over the attempted putsch against Erdogan, including some who were also German nationals.

But a gradual rapprochement began after German-Turkish journalist Deniz Yucel was freed earlier this year, while journalist Mesale Tolu was allowed to return to Germany last month. Both still face terror-related charges in Turkey.

Merkel, whose country is home to a three-million-strong Turkish community, has repeatedly stressed the importance of good relations with Ankara, a partner she relies on to help stem the flow of migrants arriving on European shores.

But Germany's best-selling Bild newspaper said it was too soon to roll out the red carpet for Erdogan, who just 18 months ago accused Berlin of "Nazi practices" for blocking rallies supporting him ahead of a referendum that gave him sweeping new powers.

"Now that Turkey is grappling with a currency crisis and its economy has hit rock-bottom, Erdogan wants to be our friend again," it said in an editorial.

"This is too much pomp and ceremony for Erdogan. We're not there yet."

Erdogan said he would use the visit to press Germany for "more efficiency" in the fight against "militants groups" like the Kurdistan Workers' Party (PKK) and the movement of Muslim cleric Fethullah Gulen, whom Ankara blames for the coup.

Other topics on the agenda will likely be Turkey's stalled EU membership bid and its role in the conflict in Syria.

To help smooth over the diplomatic reset, Erdogan could dangle the promise of a major project to modernise Turkey's rail infrastructure.

In a sign of the contentious nature of his visit, Erdogan is not scheduled to make any big public speeches in Germany.

Die Welt reporter Yucel, who spent over a year behind Turkish bars, condemned Berlin for "inviting a criminal to a banquet".

"The German government is betraying all those in Turkey who long for a free, democratic and secular society," he said.