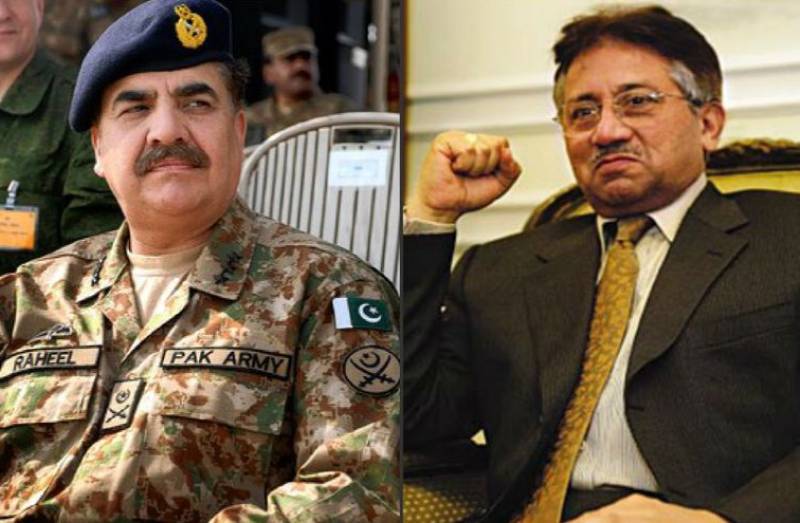 In an interview to a private TV Channel on Monday, Pervez Musharraf, who is in Dubai, claimed he had never sought any help from recently retired COAS Gen. Raheel Sharif to leave Pakistan.

"Neither did I approach anyone, nor did anyone approach me in this regard," Musharraf said refuting his earlier statement.

Musharraf went on to say media channels distorted his statement, adding that Raheel Sharif never contacted him, nor had he sent any request to Gen. Raheel over the matter.

"All media reports are based on general assumption," he added.

Pervez Musharraf had recently acknowledged former COAS Gen (r) Raheel Sharif's 'help' in enabling him to leave Pakistan despite scores of cases against him in courts.

"Well, he (Raheel Sharif) did help me and I am absolutely clear and grateful. I have been his boss and I have been the army chief before him… he helped out, because the cases are politicised, they put me on the ECL, they turned it into a political issue," Musharraf claimed while speaking in a talk show on Dunya News.

Breaking: Musharraf speaks out, says Raheel influenced the govt and helped me out, behind the scenes our judiciary works under pressure pic.twitter.com/fL4jXah6sG

"Once he [Gen Sharif] got the government to relieve the pressure that they were exerting, the courts gave their judgement and allowed me to go abroad for treatment," Musharraf elaborated.

According to Musharraf political cases were lodged against him and his name was placed in the exit control list (ECL).

The statement came weeks after General Sharif retired in November after completing his three-year tenure. He was succeeded by General Qamar Javed Bajwa. Musharraf elaborated:

Former President Gen (r) Pervez Musharraf left the country in March this year for Dubai where he has already restarted his political activities.The 70-year-old Musharraf is facing a number of high profile cases, including murder and high treason.