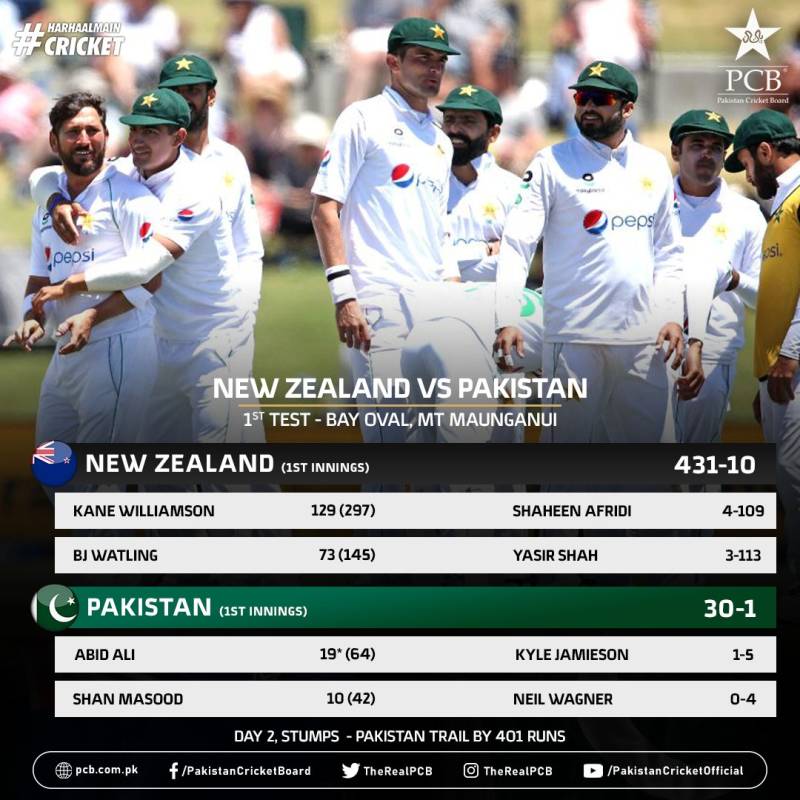 MOUNT MAUNGANUI – Pakistan finished their first innings at 30 for one in reply to New Zealand’s first innings total of 431 runs on the second day of the first Test of the two-match ICC World Test Championship series being played at the Bay Oval Mount Maunganui on Sunday.

Opener Abid Ali was batting on 19 while night watchman Mohammad Abbas was not out on zero when the stumps were drawn for the day.

Pakistan lost the wicket of Shan Masood (10) shortly before stumps; the left-hander was caught behind the wickets by wicketkeeper BJ Watling off fast bowler Kyle Jamieson after adding 28 runs for the first-wicket with Abid.

Earlier, New Zealand were bowled out for 431 in their first innings after resuming at the overnight score of 222 for three. Captain Kane Williamson posted the 23rd century of his Test career in the first session of the day off the 261st ball he faced.

The right-hander was eventually dismissed courtesy a sharp catch in the slips by Haris Sohail off Yasir Shah for 129 off 297 balls (12 fours, one six).

Watling held together the lower-order through a 73-run innings off 145 balls (eight fours). Watling who was the ninth-wicket to fall, helped the hosts get past the 400-run mark. Jamieson contributed 32 runs in a 66-run stand for the seventh-wicket with Watling.

Neil Wagner (19) was the last man dismissed; he was dismissed by Shaheen Shah Afridi who finished with figures of four for 109 in 36 overs. Leg-spinner Yasir Shah finished with three wickets for 113 runs from 37 overs.

A bizarre incident was spotted on Saturday when a naked man run onto the field during first Test match between New ...