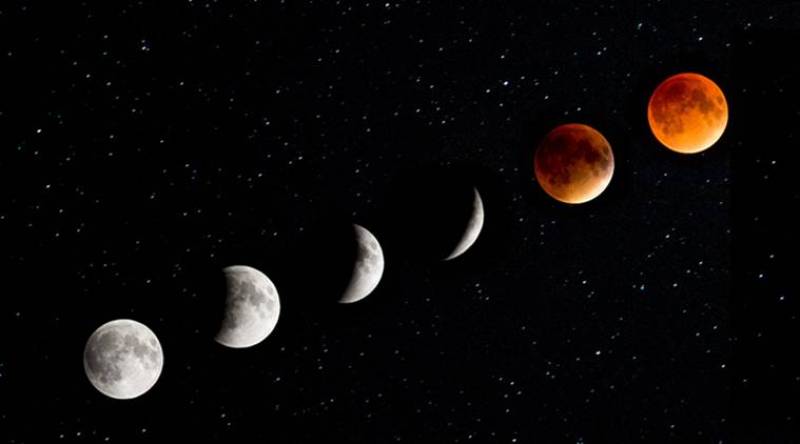 LAHORE - The century’s longest lunar eclipse is happening tonight and it will last until next morning.

According to the Climate Data Processing Centre of the Pakistan Meteorological Department, the eclipse will be witnessed from Europe, Asia, Australia, Africa, South America, Pacific, Atlantic, Indian Ocean and Antarctica.

At 1:14 p.m. EDT, a #LunarEclipse started to become visible to much of Earth's population except North & Central America. Bad weather or not located in the right place to see it? No worries! Watch our live stream online starting at 2:15pm. Details: https://t.co/l8KKluvBso pic.twitter.com/giftUiPbsv

In Pakistan, all phases will be visible. Totality will last for 103 minutes, making it the longest eclipse of the 21st century.

The details of the eclipse are:

Abdul Rashid, of the Pakistan Meteorological Department (PMD) said that the eclipse would go through a number of phases.

“Meanwhile the greatest eclipse will be visible at 1.22am PST on July 28 which is going to be a historical moment.”

How is the blood moon caused?

A blood moon, otherwise known as a penumbral lunar eclipse, is a rare astronomical event.

The moon seems red as a result of a phenomenon named ‘rayleigh scattering’ which sees the sun’s rays refracted through the earth’s atmosphere, producing a red moon.

CALIFORNIA - With scientists recently announcing the exciting discovery of a ‘lake’ hidden below the ice on Mars’ ...