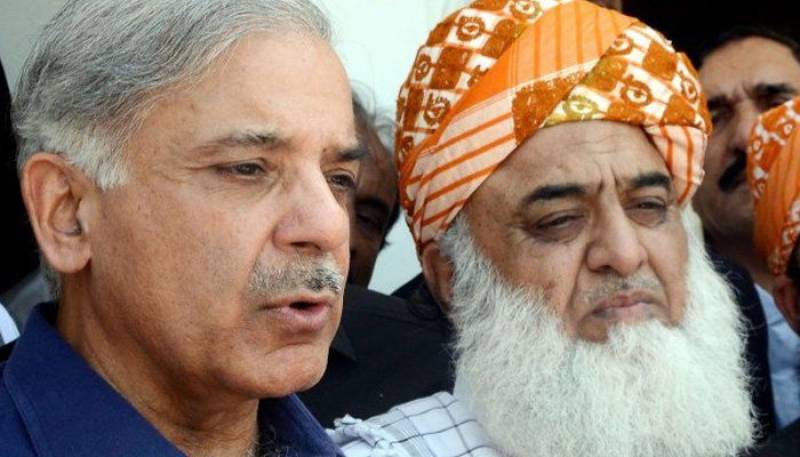 Attended by leaders of various parties, the APC was chaired by PML-N president Shahbaz Sharif and Muttahida Majlis-i-Amal (MMA) president Maulana Fazlur Rehman. It was held at the Islamabad residence of MMA leader Mian Aslam.

"People have been robbed of their mandate," Fazlur Rehman said, added, "people claiming victory in the elections, we reject their claims as well."

He remarked: "We want democracy. We have sacrificed so much for democracy to prosper in the country." People who think they have won fairly should know that they have no real power, he said.

He further said that they will organise protest demonstrations in different parts of the country till elections are held again.

'Candidates to not take oath till demands are met'

Fazlur Rehman, who lost from both NA-38 and NA-39, also shared that the APC participants have decided that their leaders will not take their oaths till their demands are met.

However, he added, that the decision of the PML-N will be confirmed later.

Shehbaz explained that he needs time to discuss the proposition with the central executive committee of the PML-N. "I need time to discuss if we will take the oath or not," he said.

Reiterating his earlier claims, Shehbaz said that votes were rigged.

Interestingly, Muttahida Qaumi Movement (MQM-P) leader Dr Farooq Sattar also showed up to the conference, despite reports that his party has agreed to join the Pakistan Tehreek-i-Insaf (PTI)-led government in the centre after a contact between PTI leader Jehangir Tareen and Khalid Maqbool Siddiqui.

Speaking at the APC, Sattar alleged that the July 25 polls were "rigged massively" and the results were altered.

As PTI workers from across the country celebrated the results, the outgoing PML-N rejected the suggested outcome, citing "outright rigging" and accusing officials of preventing its representatives from overseeing the count.

PML-N president Shehbaz Sharif alleged that the election was rigged and his party will strongly protest the results in the National Assembly. He further said that PML-N would also take up legal proceedings against the poll results.

MMA, a political alliance consisting of conservative, religious, and far-right parties of Pakistan, has also protested against the poll results. President of MMA Maulana Fazl-ur-Rehman, who lost from both NA-38 and NA-39, said the results were not the public's mandate.

"This result is not the public's mandate, in fact, the nation's mandate was robbed," Rehman said, further adding that the worst example of rigging had taken place in the General Election 2018. "It won't be easy to impose this result. We will strongly protest against it."

PPP decides not to join APC over poll results

Earlier, the PPP had decided not to attend a multi-party conference (MPC) called by the Muttahida Majlis-i-Amal (MMA) and PML-N on Friday to devise a joint strategy over alleged rigging in the 2018 general elections.

He said the PPP was not informed in advance regarding the MPC, and the party did not see the need to attend it when its own leadership was gathering in Karachi to discuss the issue.

"The PPP leadership will devise its own political strategy over alleged poll irregularities," Babar added.