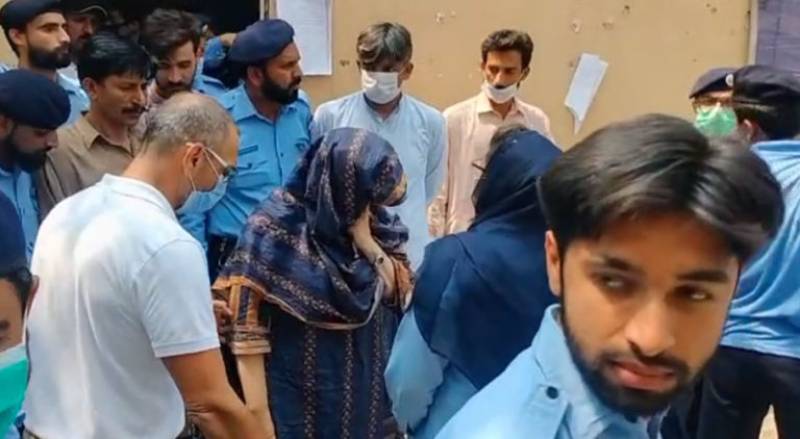 The development comes a day after Zahir Zakir confessed to killing the 27-year-old daughter of Shaukat Mukadam, who had been served as ambassador to South Korea and another country.

The parents of the suspect – Zakir Jaffer and Ismat Adamjee – were produced before the court of Judicial Magistrate Suhaib Akhtar upon completion of their two-day physical remand.

The court has directed authorities to produce the parents of Zahir and their employees – Jameel and Iftikhar – again on August 10.

During the hearing, the police requested the judge for a 14-day judicial remand of the suspects. After hearing the request, the judge asked the defense counsel whether they would like to submit their arguments in the case.

The lawyers said that they will not present the arguments if the suspect will be sent on judicial remand.

The court, on hearing this, approved the remand and ordered to send the suspects to Adiala Jail.

Later, the defense counsel sought permission from the court to meet his clients. The court accepted the plea and the suspects were brought inside the court again for the meeting.

After the brief meeting, the counsel asked the court to discharge the name of Zahir’s parents in the case. The court responded that the judicial remand of them has already been approved.

The lawyer then asked the judge to make his appeal the part of the written orders and the judge accepted the plea.

Earlier in the day, the parents of Zahir Zakir Jaffer filed a bail petition in a district and sessions court in Islamabad against their detention.

The court has admitted the petition and issued notice to the police for July 30.

Noor Mukadam was found murdered at the residence of Zahir Jaffer, the prime suspect, in the capital's upscale Sector F-7/4 on Tuesday (July 20) last week.

Police registered a first information report (FIR) later the same day against the suspect, who was arrested from the crime scene, under Section 302 (premeditated murder) of the Pakistan Penal Code on the complaint filed by Noor's father.

On July 24, the suspect’s parents and two of their employees were arrested on the charges of hiding evidence from law enforcers.

ISLAMABAD – Police said on Thursday that the suspect, who allegedly murdered the daughter of a former Pakistani ...