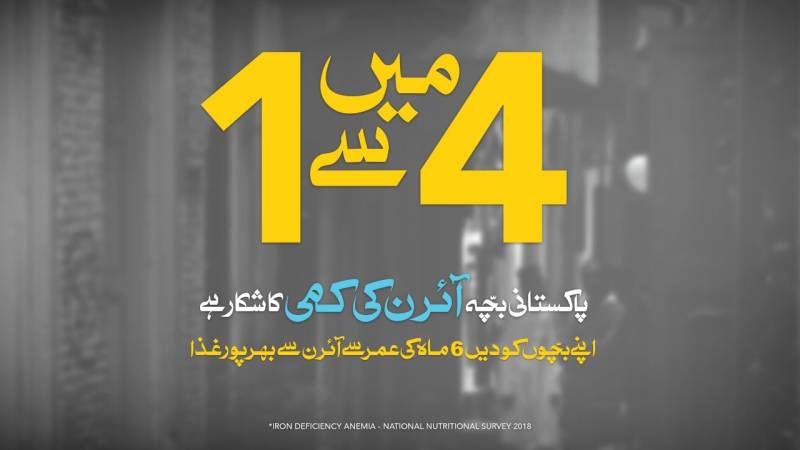 According to National Nutritional 2018, “Every fourth child in Pakistan is suffering from Iron deficiency”. 7138 children aged between 6–9 months were included in the analysis. The prevalence of IDA was 33.2%. Iron deficiency anemia (IDA) is common in the Pakistani population and an important cause of morbidity. Iron deficiency is the result of an iron imbalance in the intestines, which leads to a weak immune system as children grow. Only if this prevalence rate was lower today our nation would have been able to fight the CoVid-19 pandemic with a stronger immune system.

These numbers are quite alarming and pose a threat to the future of Pakistan; because of the fact that a child’s brain is, developed 80% in the initial 2 years we cannot afford to ruin or disable their future, as they are the future of Pakistan. Hence declaring it as a national issue will enable us to safeguard the future of our children. Our very own Musician/Philanthropist Shehzad Roy agreed to the fact and urged people not to take the situation lightly and fight it with full force

The symptoms are usually covered up by blaming the child for not listening in the class and eventually failing. Your child might not be at fault, because if your child is behaving in any of the 4 ways there is a probability that they are suffering from IDA: Lack of attention, Fatigue/ exhaustion, repeatedly becoming sick and Breathlessness. The worst part about being in such a situation is that a child cannot explain exactly how they are feeling and become victims of speculation and societal norms.

Because of the different contributing factors for the development of anemia in children, information on its prevalence, distribution, and etiology is important for adopting appropriate measures for its prevention and control. In Pakistan, nutritional anemia has been recognized to be the most common type of malnutrition present in children. Its roots come back from 1977 when a micronutrient survey of Pakistan was held; about 38% of the population was identified to be anemic. According to the 1988 National Nutrition Survey of Pakistan, 65% of the children aged 7 - 60 months were found to be anemic.

In comparison with grown-up children, a growing child needs 3 times more nutrition than them to develop & grow as a healthy kid. As soon as children reach 6 months of age they should be given a healthy diet full of nutrients, vitamins & minerals; moreover, Iron should be the major part of their diet. A list of the iron-rich foods includes Eggs, Meat, Spinach, and Iron-fortified products.

Pakistan Society of Food & Science Technologists (PSFST) has been working for this cause to create awareness in our society regarding iron deficiency and also joined hands with a social activist, humanitarian & talented singer Shehzad Roy to highlight this issue.

Make sure to get the right dose of iron & to join the cause; notice such symptoms to keep your loved ones safe and healthy; while children are the future of our country so, make sure to give them the right nutrition in these difficult times and let us pledge “Iron ki Kami Ab Nahi!