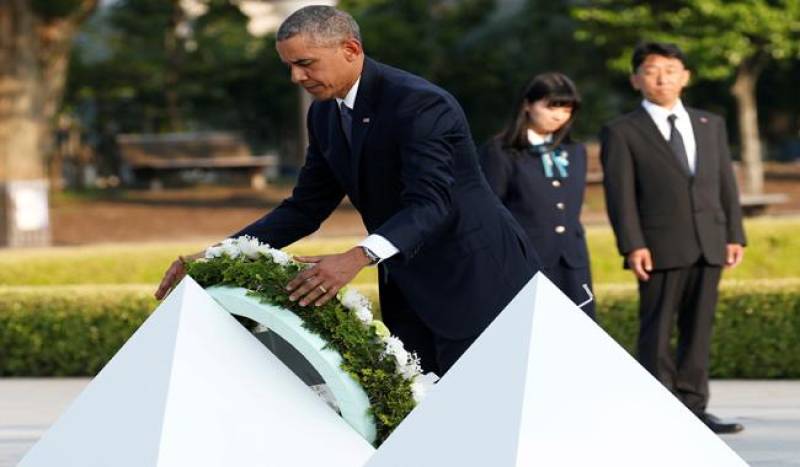 HIROSHIMA (Web desk) - President Barack Obama became the first sitting US president to visit Hiroshima on Friday, laying a wreath at the site of the world´s first atomic bombing in a gesture Tokyo and Washington hope will showcase their alliance and invigorate efforts to end nuclear arms.

However, in a bid to appease certain quarters, especially military veterans' groups, the President told Japanese media that he would not be apologizing on behalf of America for the nuclear bomb his country dropped on Japan in World War II, saying that leaders made "all kinds of decisions" during war.

Obama said he would instead honor all who died in World War Two and celebrate the long-standing friendship of two former rivals.

The city of Nagasaki was hit by a second nuclear bomb on Aug. 9, 1945, and Japan surrendered six days later.

Coming in Obama's final year in office, the Hiroshima visit also marks seven years since Obama called for the elimination of atomic arms in a landmark speech in Prague that helped him win the Nobel Peace Prize.

The visit stirred debate on both sides, with critics accusing both countries of having selective memories and pointing to paradoxes in global nuclear policy, which relies heavily on nuclear deterrence while calling for non-proliferation.

"We come to ponder the terrible force unleashed in a not-so-distant past," Obama said after laying a wreath at a peace memorial.

Before laying the wreath at a peace memorial, Obama visited a war memorial museum where haunting displays included photographs of badly burned victims, the tattered and stained clothes they wore and statues depicting them with flesh melting from their limbs.

Aides had said Obama´s main goal in Hiroshima was to showcase his nuclear disarmament agenda, for which he won the 2009 Nobel Peace Prize. "We remember all the innocents killed in the arc of that terrible war," a solemn Obama said.

"We have a shared responsibility to look directly in the eye of history. We must ask what we must do differently to curb such suffering again".

A majority of Americans believe the bombings were necessary to end the war and save lives, although some historians question that view. Most Japanese believe they were unjustified.

The White House had earlier debated whether the time was right for Obama to break a decades-old taboo on presidential visits to Hiroshima, especially in an election year.

But Obama´s aides defused most negative reaction from military veterans'´ groups by insisting he would not second-guess the decision to drop the bombs.

Atomic bomb survivors have said an apology from Obama would be welcome but for many, the priority is ridding the world of nuclear arms, a goal that seems as elusive as ever.

"I want Obama to say ´I´m sorry´. If he does, maybe my suffering will ease," said Eiji Hattori, 73, a toddler at the time of the bombing who now has three types of cancer.

"If Obama apologised, I could die and meet my parents in heaven in peace," he said at the peace park, from which ordinary citizens were later ejected amid tight security ahead of Obama´s arrival.

Earlier, protesters outside the peace park could be heard demanding an apology. Five atomic bombing survivors and their families attended the ceremony.