BANvPAK: Hasan Ali takes 5-51 for Pakistan as Bangladesh all out for 330 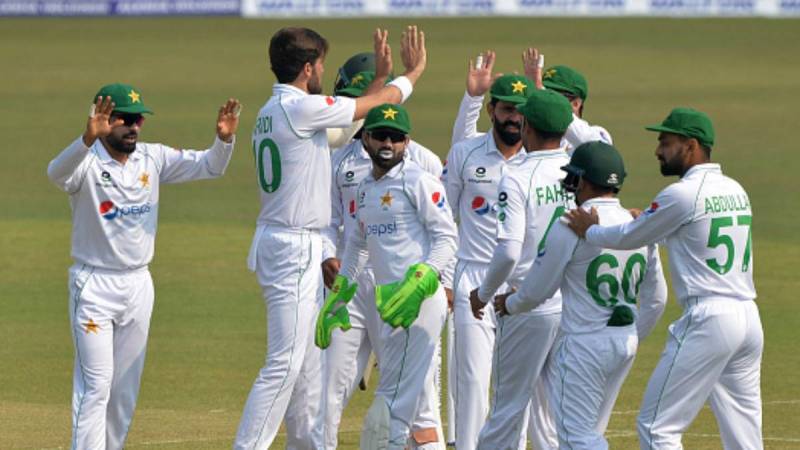 DHAKA – Pakistani pacer Hasan Ali managed to take five wickets as hosts were dismissed for 330 in its first innings of the test against Pakistan on Saturday.

Hasan, who earlier faced criticism in the T20 World cup, broke Bangladesh’s resistance in the first session of the second day when the home side resumed on 253-4. He took four wickets Saturday with Bangladesh adding just 77 runs.

Ali’s sixth five-wicket haul in tests was complemented by Shaheen Afridi, who had 2-70, and medium-pacer Faheem Ashraf, 2-54.

Meanwhile,  Bangladesh's Liton Das remained top-scorer with 114 after hitting his maiden century and Mushfiqur Rahim added 91. Mehidy Hasan was not out on 38.

As The Tigers appeared to extend its domination after a good first day, Hasan gave them a setback in second over, dismissing Liton who started with 113 and could add just one run before Ali had him out leg-before wicket

At the start of day two, Hasan Ali puts 'The Tigers' in defensive mode with two back-to-back wickets as Green Shirts looked to wrap up Bangladesh’s first innings on the second day.

Bangladesh's top-order, after toiling most of the day on Friday, collapsed as the Babar-led squad made quick inroads on the morning of the second day.

What a start for Pakistan!

Hasan Ali removes Liton Das in the second over of the day.

Vice-captain Mushfiqur was batting when the hosts looked in all sorts of trouble at 49-4 before the duo turned the tide. Liton hit seven fours to off-spinner Sajid Khan over long-on for his only six in the innings. He then struck left-arm spinner Nauman Ali to bring up his 10th Test fifty before Mushfiqur followed suit, his 24th in Tests, with a four off Hasan Ali.

On Friday, Men in Green bowlers dominated the opening session as Afridi, Hasan, Faheem and Sajid each claimed a wicket.

Bangladesh won the toss and elected to bat first against Pakistan in the first Test of the two-match series in ...

Fast pacer Shaheen Afridi set the tone for Pakistan with a gem of a delivery in the fifth over that rose sharply to glance off opener Saif Hassan’s bat to Abid Ali at short leg. He made 14. Hasan Ali then trapped the other opener, Shadman Islam, leg-before for 14.

Najmul Hossain got off the mark with a four but he too soon perished, cutting a Faheem delivery straight to Sajid at point.