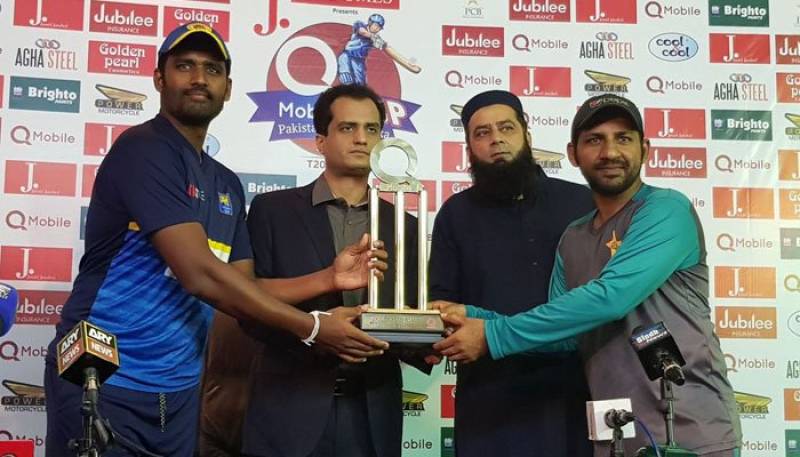 Pakistan needed 125 runs to clinch the T20 series against Sri Lanka after another brilliant display of bowling.

Shoaib Malik was caught behind on a ball by Perera while Ahmed Shehzad was also caught on a ball by the same bowler.

Medium-pace Faheem Ashraf ripped through the Sri Lankan batting line-up as he claimed three wickets in just as many balls, getting a hat-trick in the 19th over.

The third and final match will be played in Lahore on Sunday.

Pakistan kept the same team which won the first match by seven wickets, also played at the Sheikh Zayed Stadium in Abu Dhabi, on Thursday.

Sri Lanka also decided to keep the same combination as they look to level the three-match series.

It was the 70th T20I win for Pakistan, the most by any team in the shortest format of the game. It also marked 10th victory in 12 T20Is for Sarfraz Ahmed as captain, bringing his win percentage to 83.33%.

The teams will fly to Lahore for the third and final T20I at Gaddafi Stadium on Sunday, October 29.

The day will mark the return of top-flight cricket to Pakistan, as Sri Lanka become the first major cricket team to visit the country since they were targeted in a deadly ambush in 2009 -- with attack survivors among those returning to the scene.

What time does Pakistan vs Sri Lanka, second T20I begin?

Where to watch the match live?

How do I live stream Pakistan vs Sri Lanka, second T20I?

The last match of the three matches series will be played in Lahore on Sunday.