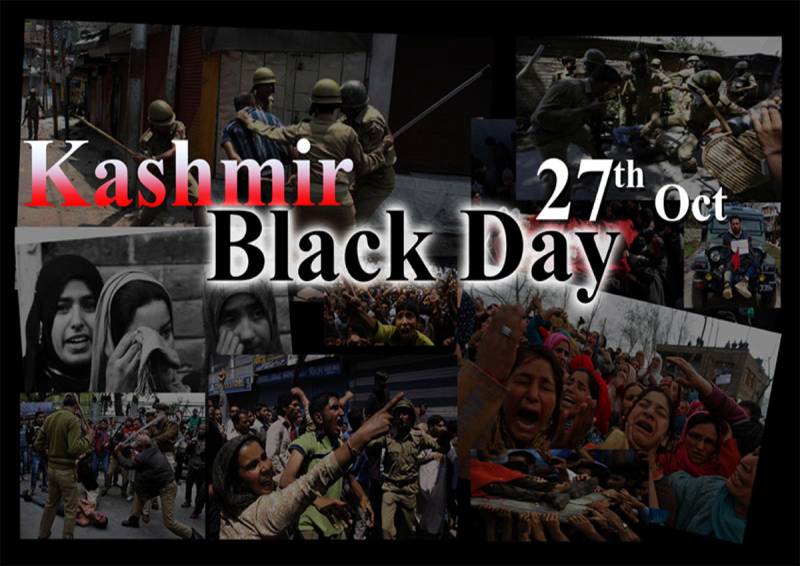 ISLAMABAD – The people of Pakistan and & Kashmir living on both sides of the LAC along with the rest of the world will observe 'Black Day' today to mark a strong protest against the unlawful occupation of Jammu and Kashmir for the last 73 years.

27th October all over the world is observed as Kashmir Black Day to mark protest and resentment by Kashmiris around the world in commemorating the forced occupation by Indian security forces in occupied Kashmir.

On October 27, 1947, the sufferings of the Kashmiri people began with the landing of Indian troops in Jammu and Kashmir.

Prime Minister Imran Khan in his message on the Kashmir Black Day  said, we are observing this day to condemn Indian illegal occupation and to reiterate our unwavering support to the Kashmiri people. The Kashmir Black Day represents a dark chapter in the human history when, 73 years ago, Indian forces landed in Srinagar to forcibly occupy the territory and subjugate people of Jammu and Kashmir.

Pakistan will continue to stand shoulder to shoulder with the Kashmiri people and extend all possible support to them.

The illegal occupation of parts of Jammu and Kashmir by India represents an international dispute, the solution of which is firmly anchored in the relevant United Nations Security Council (UNSC) resolutions in accordance with the UN charter, he said.

“Despite unabated Indian atrocities for more than seven decades posing an existential threat, India is unable to break the will of the Kashmiri people. International community bears witness that Indian state-terrorism, extra-judicial killing of innocent Kashmiris, unprecedented restrictions in freedom of speech, fake encounters, cordon-and-search operations, custodial torture and deaths, enforced disappearances, incarceration of Kashmiri leadership and youth, use of pellet guns, destruction and burning of houses to inflict ‘collective punishment’ on the Kashmiris communities and other methods of subjugation have failed to shake the resolve of the Kashmiri people in their just struggle for the inalienable right to self-determination,” he noted.