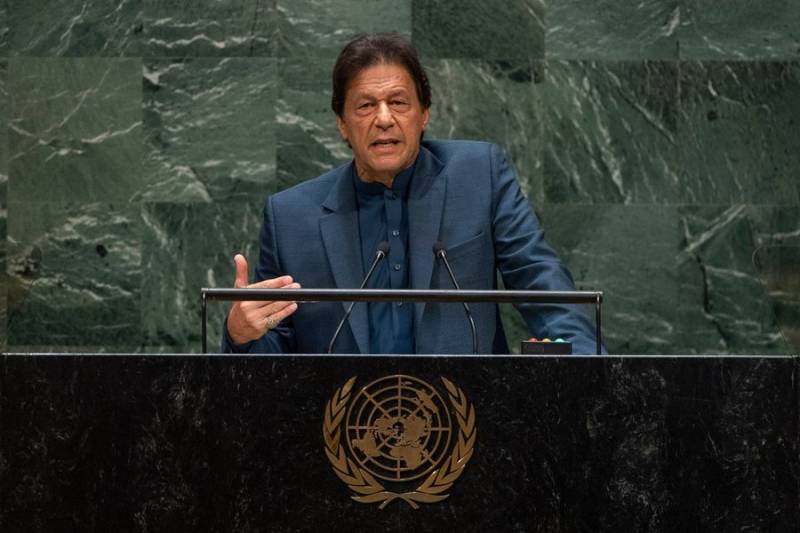 Prime Minister Imran Khan, at the start of his address, said he would like to dish in on four key areas and made an impromptu speech without a written draft.

Posted by Prime Minister's Office of Pakistan on Friday, September 27, 2019

At the onset of his speech, Prime Minister Imran Khan said it was an honour for him to represent Pakistan at the forum.

"First, let me talk about climate change; I have seen a lot of leaders talk about this. We have a lot of ideas; but as they say, ideas without funding is a mere hallucination," sad the premier.

The premier regretted that most of the global leaders were not showing seriousness in battling climate change and environmental crisis.

'Pakistan is among 10 countries affected by climate change,' the premier said and added that over 1 billion trees were planted in Khyber Pakhtunkhwa.

"In KP, a province of Pakistan, we planted a billion trees in 5 years. Now we are targeting 10 billion trees. But one country can not do anything. This has to be a combined effort of the world," said the premier.

The premier said a single country can't do much against climate change, adding that he seeks the Unite Nations to play a part in this regard.

"Pakistan is among top 10 nations in world affected by climate change. We depend on our rivers we are mainly an agricultural country. 80% of our water comes from glaciers & these are melting at an alarming pace," said the premier.

Prime Minister Imran Khan also commented on the issue of money laundering and siphoning off money by elites from under developing countries.

The elite launders money from poor countries to European countries, said the premier and added that in the last ten years, the debt [of Pakistan] went up by four times.

'Half of the money collected as tax goes to debt servicing,' deplored the premier.

The premier said it was difficult to retrieve money laundered to European banks, calling on rich states to thwart the inflow of cash earned from ill-gotten gains.

'Criminals are safeguarded by laws in rich countries,' highlighted the premier and said his government identified the offshore assets in Western countries.

The prime minister also spoke at length about the issue of Islamophobia in his speech, regretting that the spike in Islamophobia after 9/11 was alarming.

'Terrorism has nothing to do with any religion,' observed the premier and said due to Islamophobia women in certain countries find it difficult to waerr headscarf.

"Many Muslims living in countries as minorities. Islamophobia growing at alarming rates. Women wearing hijab is becoming an issue. A woman can take off her clothes in a country but can’t wear hijab," regretted the premier.

'There is only one brand of Islam taught by Prophet Muhammad (Peace Be Upon Him),' said the premier and shared that there was no such thing as radical or fundamental Islam. 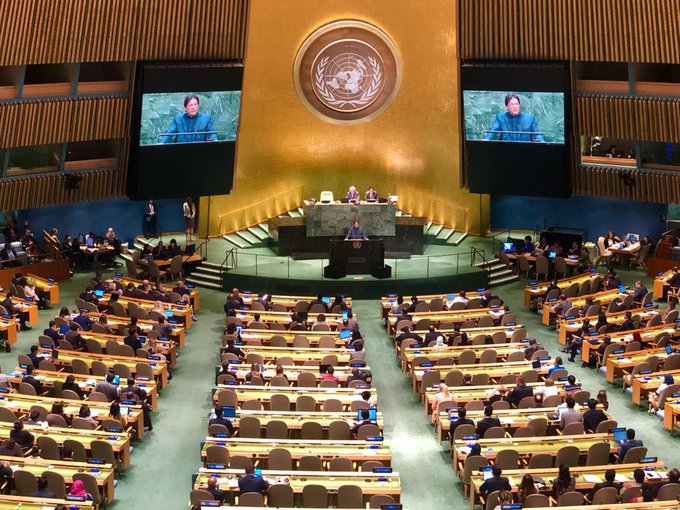 'Some of the global leaders tied terrorism with Islam,' the premier said in his speech which lasted for around 50 minutes.

The premier said suicide bombing was wrongly associated with Islam, adding that nobody researched that before 9/11 most of the suicide attacks were carried out by Tamil Tigers who were Hindus.

The premier said Islamophobia in Europe is marginalizing Muslims and marginalization creates room and leads to radicalization.

"It was not associated with Hinduism and rightly so. Religion does not teach such things," he said.

In his final and fourth point, the premier talked about the situation in Occupied Kashmir, the issue which was the central point of PM's trip.

The premier said that when he assumed power, his first priority was that Pakistan would try its best to maintain peace.

We joined the United States after 2001 and Pakistan went through one of its worst periods when 70,000 people died and $150b were lost, said the premier.

'No Pakistani was involved in 9/11,' said the premier and said Taliban and al-Qaeda were based in Pakistan.

'Pakistan paid a heavy price after 9/11 and sacrificed lives of 70,000 people,' said the premier.

After that, he diverted the attention of the audience towards the Kashmir crisis and the communication lockdown imposed in the valley.

'The purpose of my trip is to reveal what is happening in Kashmir,' said the premier adding that India illegally revoked article 370 that granted Kashmir a special autonomy, noting that the total number of India forces in the occupied valley stood at 900,000.

"We immediately returned the pilot [of the Indian jet shot down by Pakistan], saying we don’t want any escalation. Rather than taking that as a peace gesture, almost the entire campaign of Mr. Modi in the election was how we had taught Pakistan a lesson," said the premier.

He brought up the issue of Indian Spy Kulbhushan Jadhav in his speech as a proof of India's involvement in subversive activities in Pakistan.

When the curfew is lifted there will be a bloodbath, said the premier while highlighting the presence of troops in Indian occupied Kashmir.

'Kashmiris would be further radicalized,' said the premier and added that there was a probability of another Pulwama attack and Pakistan would be blamed.

'In occupied Kashmir, 8 million people are boxed in like animals,' said the premier.

"If I'm a Kashmiri and I am locked up. I hear about rapes by soldiers. Would I want to live like that? I would pick up a gun. You're forcing people into radicalisation, taking away their will to live," added the prime minister.

Prime Minister Imran Khan warned that if there is a bloodbath in Kashmir it would not be due to Islam but due to injustice.

"Forget 8 Million Muslims, had 8,000 Jews been stuck, would the Jewish community not spoken?. Makes me say that are Muslims children of lesser gods?”, Pakistani Prime Minister asked.

The premier said in point-blank remarks that Modi's arrogance and ego had made him blind.

"Modi is a 'life member"' of RSS. An organisation inspired by Hitler and Mussolini. They believed in racial superiority the same way that the Nazi’s believed in the supremacy of the Aryan race," said the premier.

The phrase Islamic terrorism allows India to dismiss human rights and further increase cruelty on the people of Kashmir, said the premier.

The premier said if a conventional war starts and there's a choice between surrender and fighting, then we [Pakistan] will fight.

"Suppose a country 7 times smaller than its neighbour is faced with a question. Either you surrender, or you fight till the end. I ask myself this question. And my belief is There is no God but Allah. We will fight," clarified the premier.

"Two nuclear-armed countries will come face-to-face and before we head in that direction the UN has a responsibility. This is why the UN came into being," said the premier.

"This is a test for the UN. You are the ones who gave Kashmiris the right to self-determination. This is the time to not appease but to take action. Number one action should be that India must lift this inhumane curfew," said the premier.