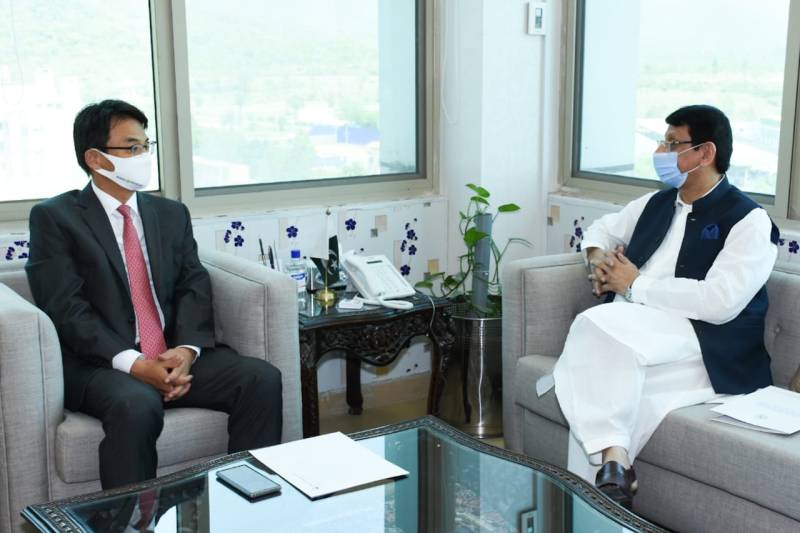 ISLAMABAD – Ambassador of the Republic of Korea Suh Sangpyo called on Federal Minister for IT and Telecommunication Syed Amin-ul-Haque in the federal capital on Wednesday.

The minister welcomed the Korean Ambassador in his office, and during meeting matters of mutual interests and related to IT and Telecommunication were discussed.

The two sides agreed to enhance cooperation in the field of IT and Telecom.

Haque said that Pakistan greatly values its relations with the Republic of the Korea. "The Ministry of IT & Telecom is taking steps regarding digitalization. Pakistan’s IT &  Telecom sector is rapidly progressing," he added.

He told the Korean envoy that Pakistan's ICT export remittances have surged to $1.512 billion at a growth rate of 43.59% during July-March of FY 2020-21, in comparison to US $1.053 billion during same period last financial year.

"Ministry of IT and Telecommunication is committed for provision of telecom service across the country including Azad Kashmir and Gilgit Baltistan (GB)," he affirmed and added Pakistan wants to get benefits from the experience  of Korea in the field of IT.

The minister also urged Korea to support Pakistan in smartphones manufacturing and assembling.

"Korean companies can invest in Pakistan as atmosphere for foreign investment in Pakistan is conducive, since exchange of IT professionals and startups between the two countries is also vital.

Speaking on occasion, the ambassador said that Korea wanted to establish information excess center in Pakistan.

He also lauded IT Ministry's efforts for promotion of IT and Telecommunication in the country.

Senior officers of the Ministry of IT & Telecom were also present in the meeting.