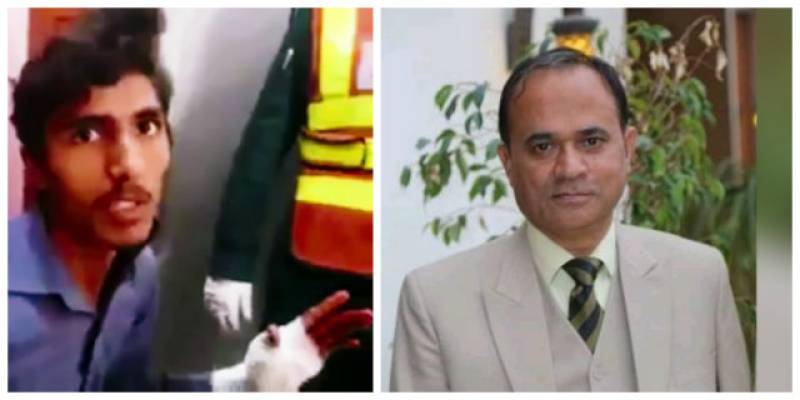 BAHAWALPUR – A Tehreek-e-Labbaik Pakistan (TLP) candidate for National Assembly (NA) seat has been arrested in murder case of a professor, police said Thursday.

On March 20, a 21-year-old Bachelor of Science student stabbed Professor Khalid Hameed to death in a small office next to the English Department staff room at the Government Sadiq Egerton College, over reservations about a farewell event scheduled to be held the following day.

Khatib Hussain, the student who killed his teacher, remained in contact with Zafar Gillani a Layyah-based lawyer TLP candidate from NA-187, through WhatsApp a night before killing professor Khalid Zafar.

Police had arrested the murderer red-handed.

BAHAWALPUR - A student stabbed his teacher to death on Wednesday merely for organising a welcome party which he ...

Following the gruesome murder, the police took Zafar Gillani and five others into custody from different cities including Kehrore Pakka, Rahim Yar Khan and DG Khan. According to police sources the under-investigation persons were arrested through social media links.

Three mobile phones linked to this case are now being analysed by digital experts at the Punjab Forensic Science Agency (PFSA).

Police have sought 15-day physical remand of the TLP leader from an anti-terrorism court.

Media reports suggest Gillani had allegedly imposed a Fatwa on the professor and allowed Khateeb to kill him.

The ultra-religious Tehreek-e-Labaik Pakistan (TLP) party, which makes punishing blasphemy its main campaign rallying cry and lionizes the bodyguard who killed Punjab governor Salmaan Taseer in 2011, won more than two million votes in the 2018 general elections, though it has no parliamentarians in the National Assembly and only holds two provincial seats.

The following table shows the percentage of total polled votes PTI, PMLN and TLP got in each NA constituency. ...

In November, TLP staged a crippling blockade of the capital after a tweak to a religious oath, which it claims was tantamount to blasphemy. Seven people were killed and more than 200 wounded in clashes with the police and TLP’s supporters only dispersed after striking a deal with the military.

In May, an extremist linked to TLP shot and wounded Pakistan’s then-Interior Minister Ahsan Iqbal.