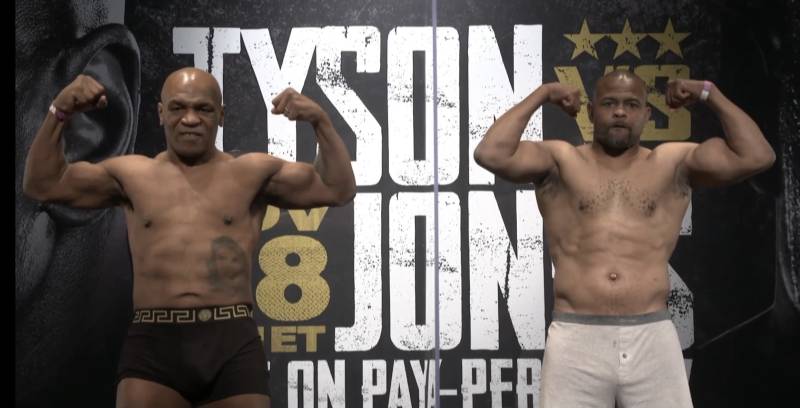 Mike Tyson returns to the ring after 15 years to fight Roy Jones Jr for a high-profile exhibition bout on Sunday.

The retired American duo is set to square off in Los Angeles in a hotly-anticipated if somewhat bizarre spectacle that was originally supposed to take place in September, before being delayed.

Both the fighters showed off their impressive physiques with Tyson weighing 220.4 and Jones Jr at 210 during the face-offs on Friday (US time).

Two of the best to ever lace up the gloves 🥊@MikeTyson and @RealRoyJonesJr went face-to-face at weigh-ins. #TysonJones pic.twitter.com/RYKLXHykPw

Meanwhile, 51-year-old Jones a former four-weight world champion who remains the only boxer ever to win a heavyweight world title after beginning his career at light-middleweight only ended his 29-year, 75-fight career in 2018, after a farewell victory over Scott Sigmon in his hometown of Pensacola, Florida.

The contest between Tyson (54) and Jones (51) in Carson, California is an ‘exhibition’. And despite a belt on the line, and judges scoring, there will be no “official winner”.

Their fight at Staples Center is an eight, two-minute rounds sparring session of sorts.

The exact rules for his exhibition bout have caused some confusion.

However, that has since been disputed by entertainment app company Triller, who is also hosting the event.

The winner will receive a special ‘Frontline Battle Belt’, specially created by the WBC who will be scoring the bout for this occasion.