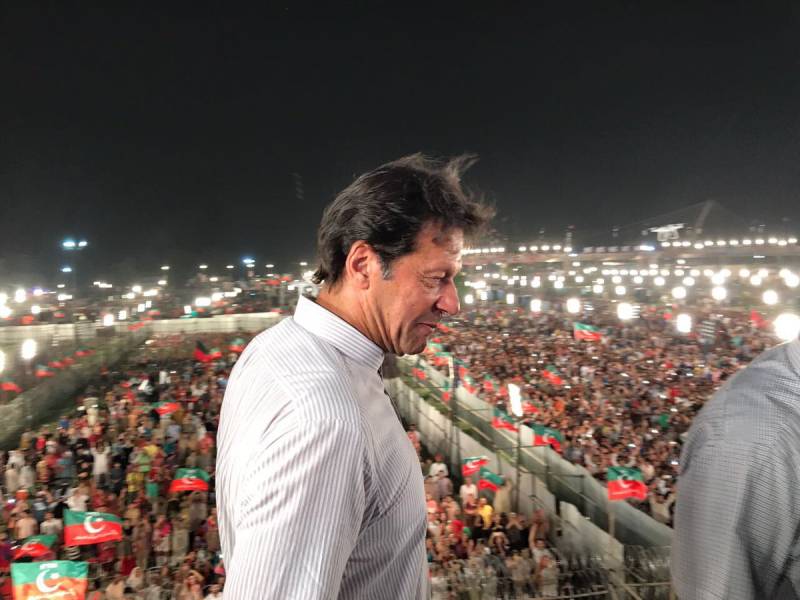 LAHORE -  Pakistan Tehreek-e-Insaf (PTI) chairman Imran Khan on Sunday welcomed and thanked the crowd who flocked to the iconic Minar-e-Pakistan to attend the party's power show in Lahore.

Addressing the rally, Imran, who earlier dubbed it a "Tsunami plus show", expressed his gratitude to the participants for turning out in large numbers to witness the "historic" gathering.

"Whenever I gave a call to you, you never disappointed me," he told the crowd.

Khan presented an 11-point agenda during his address tonight.

Speaking about an 11-point agenda to make a "Naya" (new) Pakistan, he said, "Ask yourself, why was this country made? Why, on this ground in 1940, did Quaid-e-Azam declare that we want Pakistan?"

Pakistan, today, is contrary to Quaid and Allama Iqbal's vision, he said.

"The Pakistan that Quaid-e-Azam wanted would afford equal rights to all citizens including the minorities, where the Hindu community, Sikhs, and Christians would be equal citizens. This country was to be formed on the model of Madina, where the basis of law was justice," Imran added.

Quoting Prophet Mohammad's (PBUH) example, the PTI chief said, "Prophet (PBUH) brought the entire Muslim nation towards truth and righteousness by way of his own example. The Muslim nation then ruled the entire world for 700 years but as soon as the royal system of kingdoms was established, the poor became poorer and the rich became richer."

Referring to a visit by Prime Minister Shahid Khaqan Abbasi to the United States earlier this year, Imran said it was embarrassing for Pakistan to see its PM treated [with lack of dignity] at US airports.

"We are on crossroads today, on one end it's disrespect and on the other, it's dignity." 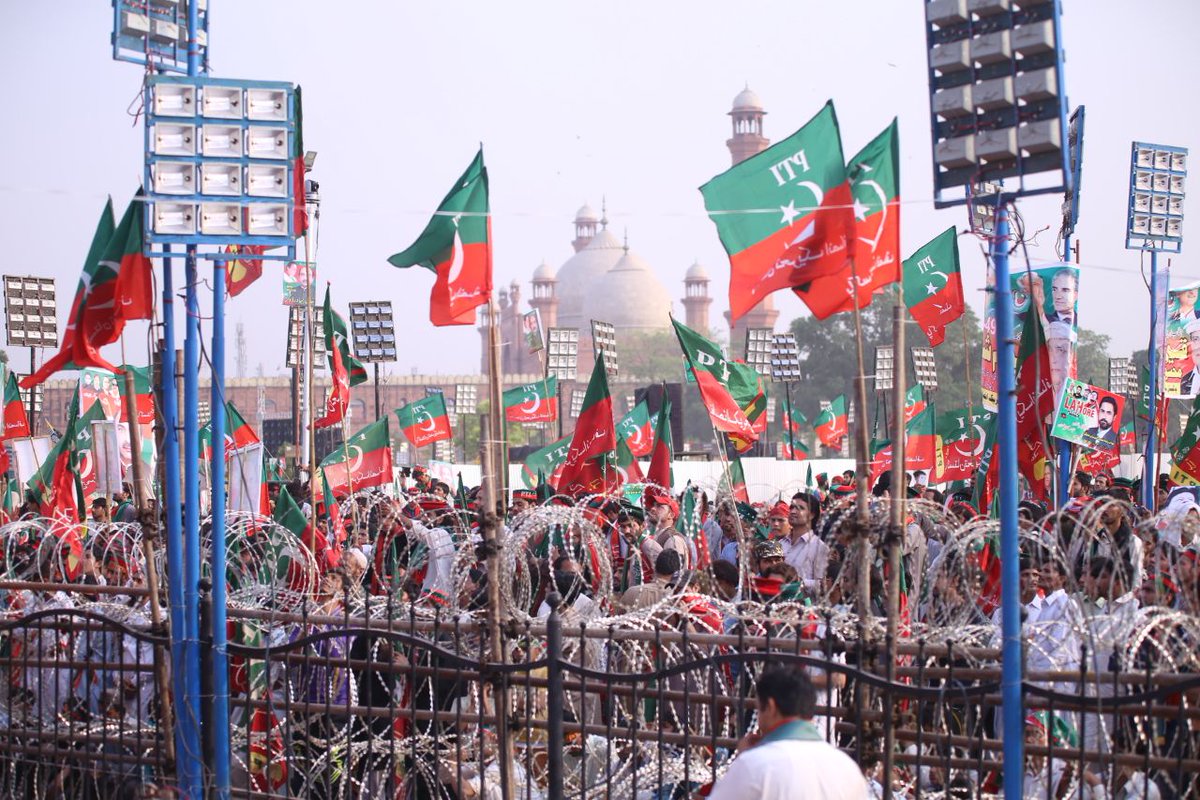 Laying out the 11-point agenda which, according to him, will help bring "one system of justice, reduce poverty and elevate the living standards of the poor", Imran started with education.

"First point: No country can ever flourish without emphasising on the education. All the Asian Tigers educated their children, the men and the women," said the PTI chief.

"3.5 crore children study in government schools. Half of Punjab's budget is being spent on Lahore [alone]. I ask Shehbaz Sharif who's ruling Punjab for 10 years, how many international-level universities did he establish?"

"Countries don't flourish because of the roads and bridges, but when you spend on human development," Imran lashed out at the present government, adding that the PTI will "invest maximum on the development of the people, on one education system in Pakistan."

The second point is about reforming the health system, he said. "When I can make SKMCH without government, I will build hospitals in Pakistan where the poor wouldn't have to worry about money and the rich wouldn't need to go abroad for treatment."

Imran vowed to introduce a health insurance system modelled on the 'Sehat Sahulat' card in Khyber Pakhtunkhwa for the poor across Pakistan.

Next up is how to generate revenue in order to rid the country of heavy debts, he said.

"We don't have money to run the country, we are in heavy debt. I claim in front of you today that I will show you how to gather money from this nation," said Imran as he resolved to revolutionise tax collection system in the country.

Citing the example of his decision to expel 20 MPAs from his party for "selling votes" in the Senate elections earlier this year, Imran promised the people he will eliminate corruption from the country.

"We will stop money laundering, we will strengthen the NAB and FBR."

The PTI chairman said he promises to never let anyone steal the public finances while urging the nation to support him in his “war against the corrupt leadership” of the country.

The party, which holds the provincial government in Khyber Pakhtunkhwa, is holding its gathering at the Minar-i-Pakistan, the most symbolic monument in Lahore, with "Dou Nahi, Aik Pakistan" being the main theme of the event.

Imran termed the overseas Pakistanis as the biggest investing potentials for the country and resolved to bring investments into Pakistan.

"We will reduce the tax on electricity and gas for our industries so that they could compete with Indian market," he said.

Promising the youth much better employment opportunities, Imran said he would especially focus on boosting the tourism industry of Pakistan.

Imran said he would improve agriculture and the lives of farmers on 'an emergency basis.'

"They work for the whole year and get nothing in the end. They are being exploited by the sugar mill mafia."

The PTI chief resolved to strengthen the federation. "We know how the injustice is being done to smaller provinces. I know more about Khyber Pakhtunkhwa," he said.

Imran said the environment was a priority on the party's manifesto.

"For the first time ever, the Khyber Pakhtunkhwa government paid special attention to the environment," he said, adding that the party plans to plant 10 billion trees across Pakistan.

"We can even clean the rivers," he added.

He stressed the importance of justice and the police system.

"Our Khyber Pakhtunkhwa police is totally depoliticized. There's no victimization via FIRs, there not a single extrajudicial killing in the province while in Sindh Rao Anwar killed 400 people."

Imran Khan said that his party has an extensive program for women empowerment.

"Whatever I am today, it's all because of my mother who made me a patriotic person and raised me to be a truthful person." 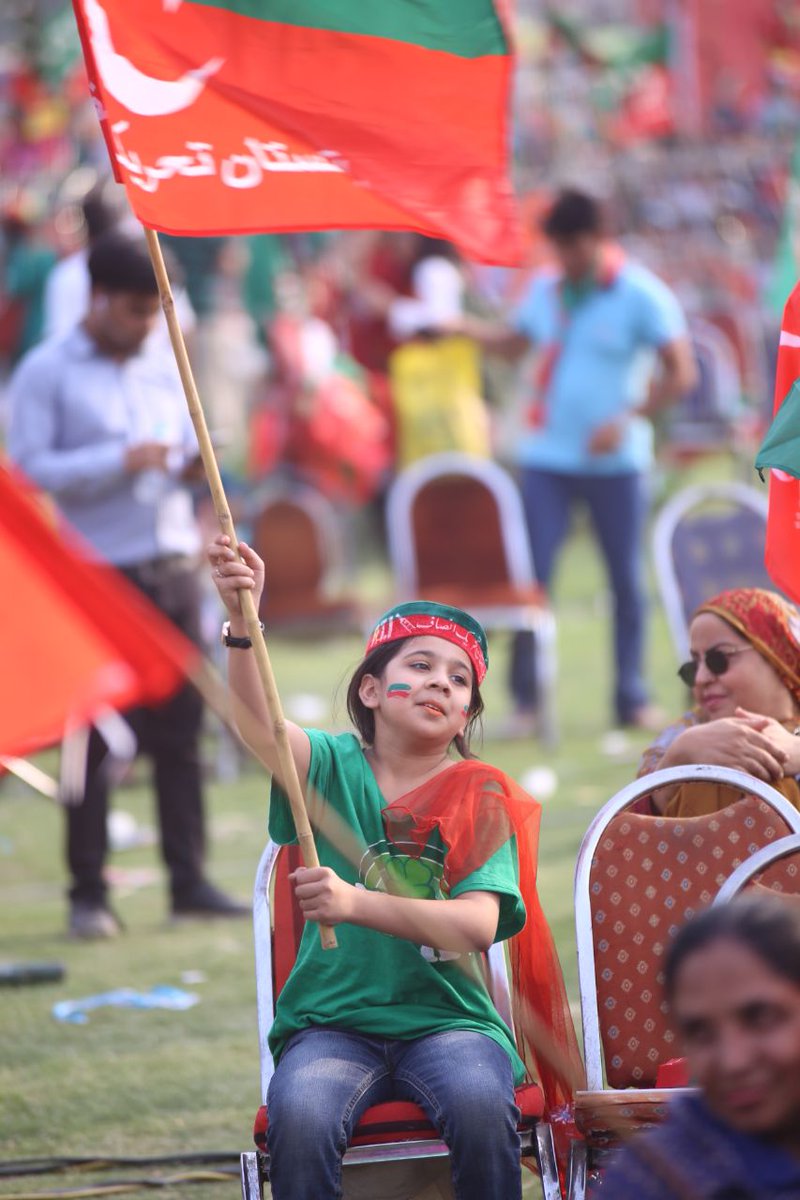 Caravans from all over the country are going to join the rally, which is touted as being the main power show of the party in the city before the federal and provincial governments end their respective tenures next month.

Famous Pakistani singers including Attaullah Esakhelvi, Strings, Ibrar-ul-Haq and others will perform in the concert. A firework show will also be held on the arrival of Imran Khan at the venue.

All the preparations for the rally have been completed as a 120 feet long and 60 feet wide stage is set for the party leadership.

More than 50, 000 chairs are placed in the arena which also has been decorated with party flexes, banners, and flags. 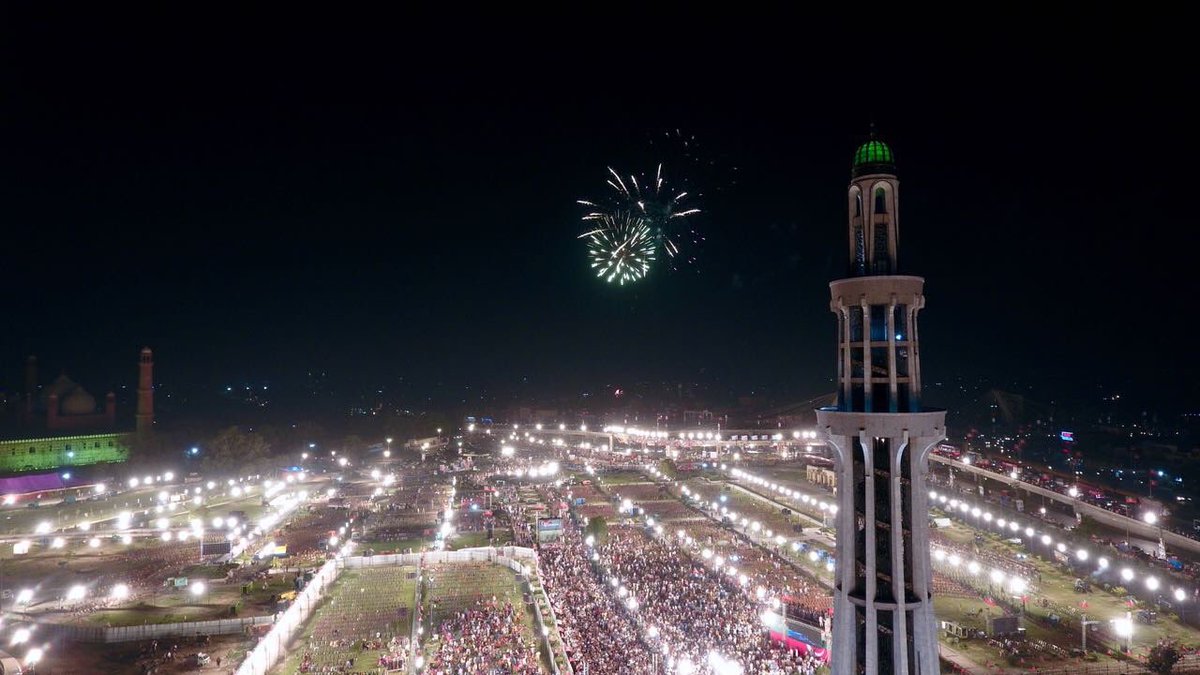 After visiting the venue last night, PTI chief Imran Khan said today's gathering would be "the mother of all jalsas" as "never have I witnessed such junoon at jalsagah a night before our jalsa."

The party chairman will present a 10-point agenda in the rally. He is expected to address the gathering around 9pm.

As a part of preparations for the rally, PTI has also released three new party songs. One of the songs has been sung by singer Rahat Fateh Ali Khan titled Dam Mast Qalandar. The lyrics of the song have been penned by PTI leader Usman Dar.

The songs carry the theme of ending corruption and Iqama. Dar said that he completed the composing and recording of the song within 22 hours.