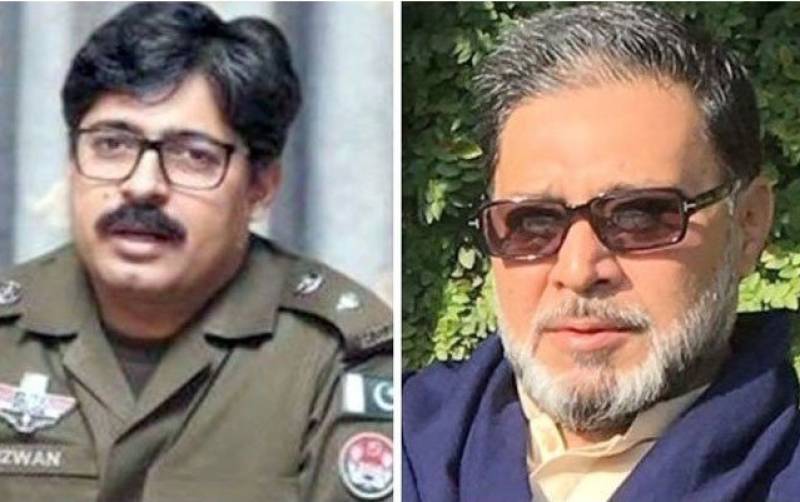 ISLAMABAD - The confrontation between Khawar Maneka , the former husband of Bushra Maneka , and police is a result of a series of events which happened in August with the latest checkpoint incident garnering spotlight.

Media veterans Rauf Klasra and Amir Mateen, have detailed in their prime time show that the first tussle between Maneka family and police emerged on August 5 when Bushra's daughter was marching towards Pakpattan late in the evening.

Mateen, who claims to have evidence of each and every claim, expressed that when Maneka 's daughter was walking on foot, the police noticed it unusual and started providing security to the lady through police mobile.

However, the security was taken as a monitoring tactic by the Maneka family which felt dismayed at this.

Mateen explained that the administration kept vigilant throughout the night to ensure security to the lady, however, DPO Rizwan Gondal received a message in the morning asking him to offer an apology to the Maneka family.

The journalist continued that Gondal refused to apologize, saying it would dent the prestige of the department.

'Ibrahim (son of Khawar Maneka) refused to meet Gondal at his residence as well because the cop wanted to clarify things,' detailed Mateen.

He continued that the tension started between Rizwan Gondal and Maneka family after the incident, however, another incident happened on August 23 which fueled the tension.

On the second day of Eid ul Azha, Khawar Maneka was traveling on his personal vehicle and was asked to stop at a picket, which he did not, prompting police to follow him.

Amir Mateen revealed that soon the Elite police chased Maneka and asked him that he could have told the police in advance to avoid such pursuit, however, Maneka reportedly used harsh words and misbehaved with Rizwan Gondal as well.

'Rizwan Gondal and Sahiwal RPO Sharif Kamal were summoned to the CM House on the third day of Eid, on August 25, where another civilian was there to grill them,' said the journalist.

Interestingly, Amir Mateen revealed that a civilian quizzed the police officers at the CM House about the incident and asked about their enmity with the Maneka family.

As soon as the inquiry into the matter started, a notification was issued, confirming the transfer of Gondal.

The civilian who grilled the police officer is the son of a sitting Pakistan Muslim League Nawaz lawmaker who contested elections against Pervaiz Elahi for Speakership: Ch Iqbal Gujjer.

Ahsan Jameel Iqbal Gujjer was the man sitting at the CM House who investigated the police officers, though he holds no official position authorizing him for such probe. Interestingly, the wife of Ahsan is a friend of Bushra Maneka , Imran Khan's wife.

It is still not sure whether Bushra Maneka used her friend to hold the police officer accountable, however, Rizwan Gondal was transferred after the incident.