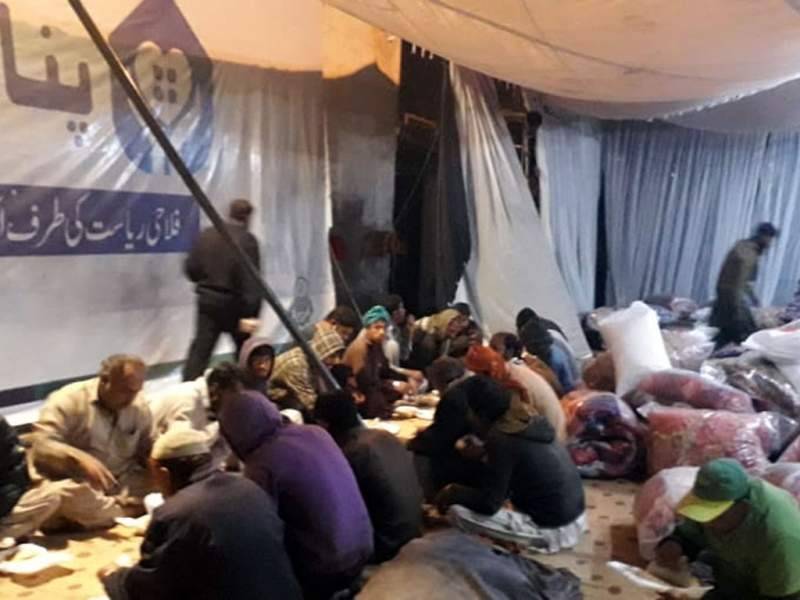 ISLAMABAD — In order to broadening the circle of social responsibility by the state to its citizens' district administration of Islamabad Capital Territory (ICT) has set up another temporary shelter home (Panahgah) near Peshawar Morr for the homeless and passenger people.

An ICT spokesman told APP that people were found sleeping on the footpath near sector G-9/4, therefore, it was decided to establish another shelter home especially for the laborers working in that area.

He said every visiting guest to the Panahgah is investigated and medically examined before giving admission in the shelter home.

Security persons have also been deployed outside shelter homes if someone is found having links with any banned organizations or drug addicts than they are not allowed to enter the place, he said.

Hailing the ICT’s move, an entrepreneur Sadia Tariq said a large number of laborers and other people visit the capital everyday to find work amid having scarce resources to manage accommodation.

“There must be a mechanism to engage people in some job or healthy activity to make them responsible citizens as well,” Ahmed, a resident of I-10, said.

“In the past, there was a shelter home in Sector G-7 but it could not serve the purpose as many people stayed there for years and no one was able to get the rooms vacated”, he added.

Deputy Commissioner Hamza Shafqaat said, “it is the first step towards welfare-oriented administration and we are trying our best to give due care to those living in Panahgah”.

He said that the project is aimed at restoring the self-respect of those people who spend the night under the open sky besides broadening the circle of social responsibility by the state and citizens.

He said that all the assistant commissioners kept visiting these shelter homes for looking after the homeless people and volunteered to contribute in this project on their own. “I am happy to see the spirit of public service in them”.

Besides that shelters homes inhabitants are provided with all basic facilities including blankets, chairs, LED televisions for entertainment and medical care, while the two-time meal is also being provided to them, he said.

The city administration following the directions of Prime Minister (PM) had inaugurated two shelter homes on the busy junctions of the city. One was established at I-11/4, at the famous Sabzi Mandi Mor, which is also the largest bus stand of the city and thousands of people travel, enter and exit the city from there.

He added that I-11/4 shelter home has the bed capacity of 120 people, while ten beds have been placed in separate rooms for the female visitors as well. Six washrooms have also been constructed inside the building.

The other one has been established in Tarlai area, which is also another busy point on the boundary with Rawalpindi.  In less than a month, both the shelter homes provided accommodation to around 4000 people, while hundreds of people daily come and dine there as well.