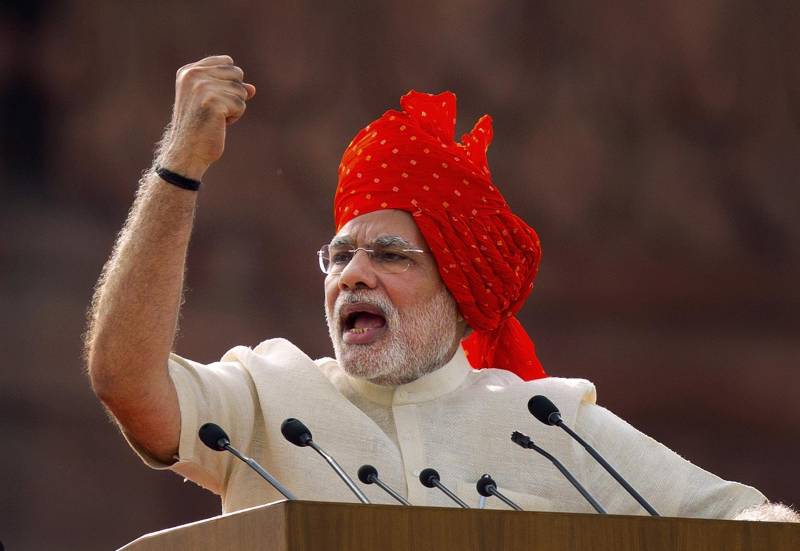 NEW DELHI - After a spate of killings targeting Muslims, Indian Prime Minister Narendra Modi on Thursday broke silence and slammed murder in the name of cow protection, which are worshipped by the majority of Hindus in country, international media reported.

Modi said in a statement, "Killing people in the name of Gau Bhakti (cow worship) is not acceptable. This not something Mahatma Gandhi would approve".

Killing people in the name of Gau Bhakti is not acceptable. This is not something Mahatma Gandhi would approve: PM @narendramodi

The comments follow a horrific incident of Junaid Khan being lynching by a mob after the 15-year-old Muslim and his brother were accused of carrying beef.

GUJRAT - Indian police said on Saturday that a man was arrested in connection with a stabbing that led to the killing ...

According to Amnesty International, a rights body, at least 10 Muslims have been killed in India since April in the wave of vigilante murders.

Khan's murder sparked protests across India, with demonstrators calling for an end to the violence under the slogan "not in my name".

Citing incidents of violence, Modi expressed his "pain and anguish at the current environment" in India.

No person in this nation has the right to take the law in his or her own hands in this country: PM @narendramodi

"No person in this nation has the right to take the law into his or her own hands in this country. Violence has and never will solve any problem," the prime minister said.

Hidustan Times, an Indian media outlet, quoting IndiaSpend content analysis of the English media stated, "Muslims were the target of 51% of violence centred on bovine issues over nearly eight years (2010 to 2017) and comprised 86% of 28 Indians killed in 63 incidents".

"As many of 97% of these attacks were reported after Prime Minister Narendra Modi’s government came to power in May 2014, and about half of the cow-related violence – 32 of 63 cases – were from states governed by the Bharatiya Janata Party (BJP) when the attacks were reported, revealed our analysis of violence recorded until June 25, 2017".