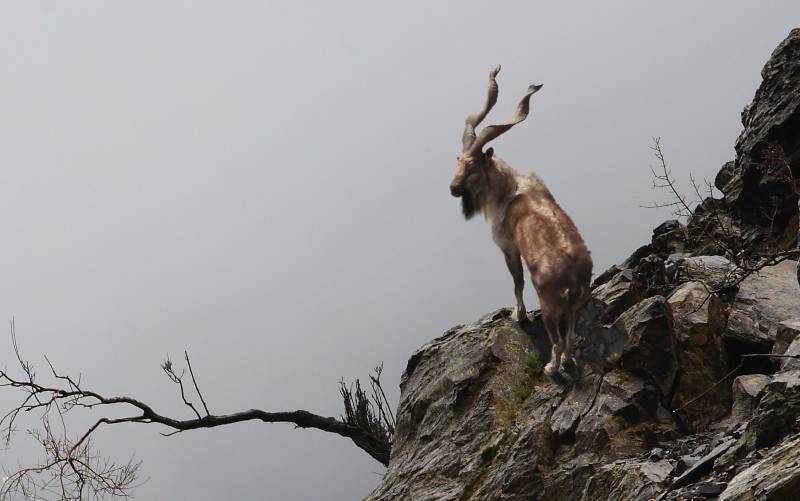 Reports cited that officials of the provincial wildlife department relayed that the large wild goat fell into a river near the Garam Chasma road after being hit by a bullet.

The animal, listed on the IUCN Red List as near threatened, was rescued by the wildlife officials and immediately rushed to a veterinary facility. The poor animal is said to be in a critical condition.

Meanwhile, a complaint has been lodged against the suspect, who managed to flee from the site soon after shooting the Kashmir Markhor.

KP lawmaker Faisal Amin Khan while commenting on the matter said all-out efforts will be made to nab the culprit.

A tourist shot injured an endangered female Markhor in Toshi Game reserve near #Chitral. Markhor was drinking water from the river when an unknown tourist opened fire from other side of the river. The wounded goat has been retrieved & under treatment at a local vet clinic @WWFPak pic.twitter.com/luhZmao4sp

The national animal of Pakistan Markhor is endangered in the area because of habitat loss, unsustainable hunting, and competition with domestic livestock. Its habitat includes the Hindu Kush Himalayas in Pakistan, India, Uzbekistan, Afghanistan, and Tajikistan.

Locals killed a leopard in Abbotabat’s Circle Bakote area after it entered populated area, it emerged on ...

The animal is protected by local and international laws like the Convention on International Trade in Endangered Species. It can be found in Gilgit-Baltistan, Chitral, Kalash Valley, Hunza among other Northern parts of Pakistan.

The government of Pakistan has introduced a scheme that makes the hunt legal for the four-legged herbivore. A hunting trophy license is issued after a proper auction by Peshawar’s wildlife department. The highest bidder is then given a permit to hunt one animal.