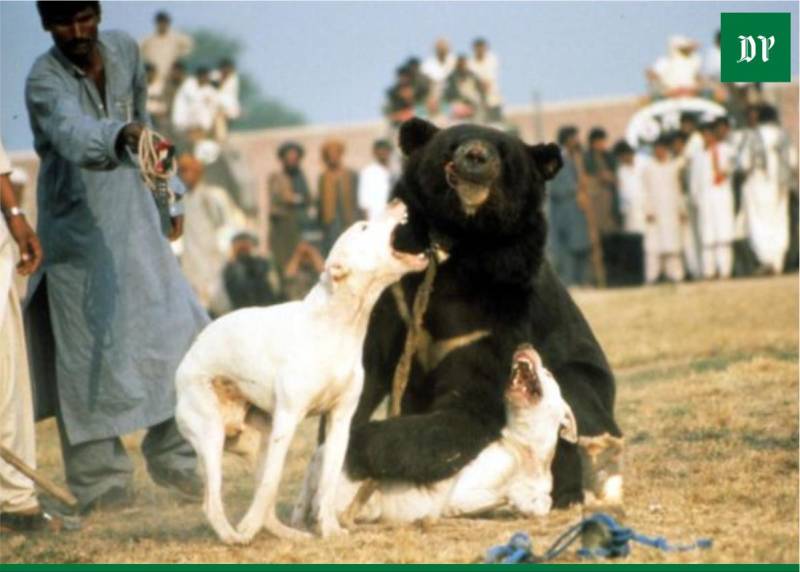 KARACHI – Animal rights activists are calling for a ban on bear-baiting after a video of the bloody form of outlawed sport for entertainment is getting viral on social media.

In the video, shared by SAYYA Animal Shelter, a big black bear is tied to a pole from its nose, with its nails already cut, and two trained fighting dogs unleashed on the poor animal while people enjoy the cruelty.

A strong response to the animal abuse renews the demand for strict action by the government against the banned activity.

“The Government must take immediate and top priority action against this illegal & inhumane trade of wildlife & put a ban on use of any animals for entertainment of people,” wrote Sarah Gandapur.

The bear baiting was banned in Pakistan in 1980 by the Prevention of Cruelty to Animals Act, but it is still common in deeply rural tribal areas due to poor promulgation of the law.

In 2015, the Sindh wildlife department promulgated the law to curb the bloody galas.

Earlier today, Prime Minister Imran Khan once against expressed his commitment that rare species in the Karakoram National Park will be protected.

The Himalayan Brown Bear in Pakistan’s just announced Karakoram National Park. Other rare species that will be protected in this National Park will be the Snow Leopard and the magnificent Marco Polo sheep. pic.twitter.com/2jxHaNL6mF

In a tweet tonight, he shared a video of a Himalayan Brown Bear walking in the snow. The Himalayan species also include Snow Leopard and magnificent Marco Polo sheep.

Earlier this week, the Punjab government approved changes in wildlife rules of the province to bar private possession of bear and monkey.

ISLAMABAD – The Ministry of Climate Change has planned to create a pollution-free amusement park in ...