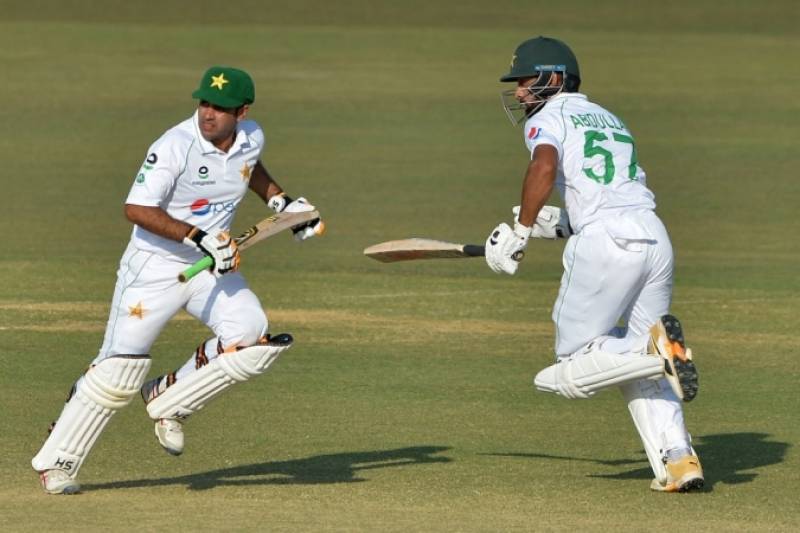 CHATTOGRAM – A brilliant century stand for the undefeated first wicket between Abid Ali and Abdullah Shafique had Pakistan on the verge of victory in the first Test against Bangladesh before fading light resulted in early stumps on the fourth day.

Pakistan, chasing 202 to win the first of the two Tests, were 109 for none in 33 overs with Abid Ali, fresh from a century in the first innings, and Abdullah Shafique, who made 52 on day two, scoring solid half-centuries.

This was only the second time in Pakistan’s Test history, which stretch 440 matches, that an opening pair recorded two century stands in a match.

Imran Farhat and Taufiq Umer did it first time against South Africa in Lahore in 2003, when Pakistan came out victorious by eight wickets.

Abid and Abdullah were unbeaten at 56 and 53 and will resume Pakistan’s pursuit of the remaining 93 runs on Tuesday.

Earlier, a sizzling Shaheen Shah Afridi recorded his fourth Test five-wicket haul, which restricted Bangladesh to 157. The left-arm pacer returned five for 32, sending Liton Das (59) and Abu Jayed back in the hut after he had taken three wickets for six runs last day.

Liton scored a fighting 59 off 89 to keep Bangladesh’s innings alive, after debutant Yasir Ali had to walk off the field after a scorching bouncer by Shaheen hit the flesh of his helmet.

Off-spinner Sajid Khan was also amongst the wicket takers as he accounted for Mehidy Hasan Miraz, Nurul Hasan and Taijul Islam.