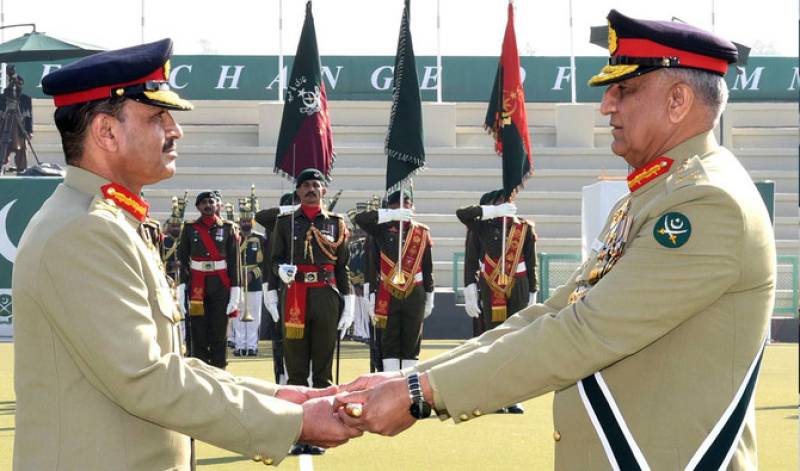 ISLAMABAD – Outgoing military chief Gen Qamar Javed Bajwa on Tuesday handed over the command of the army to Chief of Army Staff General Syed Asim Munir at a ceremony being held at the General Headquarters (GHQ) in Rawalpindi.

Gen Bajwa passed the baton of command to Gen Asim at a ceremony held at General Headquarters (GHQ). In the ceremony, the outgoing chief hands over the baton, the Malacca Cane, an integral part of high-ranking army officials.

The change of command ceremony started after 10 am, with the army band performing national songs to pay tribute to the top leadership.

The outgoing chief and Gen Asim Munir laid a wreath at the martyr's monument and offered prayers.

In his final speech, Gen Bajwa expressed gratitude for being given the opportunity to lead the armed forces. He then felicitated Gen Asim on being picked as the next top commander.

COAS also expressed hope that his promotion would be a cause for the progress of the nuclear-armed country. He recalled his association with Gen Asim, which goes back 24 years, and acknowledged his achievements.

Gen Bajwa mentioned that besides being a Hafiz-i-Quran, Gen Asim is a professional, and a principled officer. I am certain that under his leadership the army will reach new heights of success, he said before ending his speech.

Who is Lt Gen Asim Munir?

General Syed Asim Munir was promoted to the rank of a four-star general and notified as Pakistan's next army chief on November 24, 2022. He was picked for the coveted post for being the senior most officer in the Pakistan Army after outgoing Army Chief Qamar Javed Bajwa.

Gen Munir, who was serving as Quartermaster General in the Pakistan Army at the time of his promotion, entered the service via the Officers Training School (OTS) programme in Mangla and was commissioned into the 23rd Battalion of the Frontier Force Regiment.

Gen Munir commanded troops in the Force Command Northern Areas as a brigadier under Gen Bajwa, who was then Commander X Corps. He was appointed DG of the Military Intelligence in early 2017 and then ISI Director General in October 2018.

Despite his retirement due on November 27, Gen Munir was one of the top contenders for the coveted post of Pakistan's next chief of army staff (COAS) that would fall vacant on Gen Bajwa's retirement on November 29, 2022.

On November 24, 2022, Prime Minister Shehbaz Sharif picked him as the next army chief and President Arif Alvi approved the summary for his appointment the same day. His retirement was frozen until his appointment as the new army chief of the country.

Gen Munir is the first army chief in the history of Pakistan who is a 'Hafiz-e-Quran'. He belongs to a well-known religious family of Rawalpindi. He memorised the Holy Quran at a seminary, Darul Tajweedul Quran, located near DAV College Road in the garrison city. He's a student of the late Islamic preacher Hafiz Khalil Ahmed.

Gen Munir's father served as a principal of a Tariqabad school in Rawalpindi Cantonment and he too was a 'Hafiz-e-Quran'.