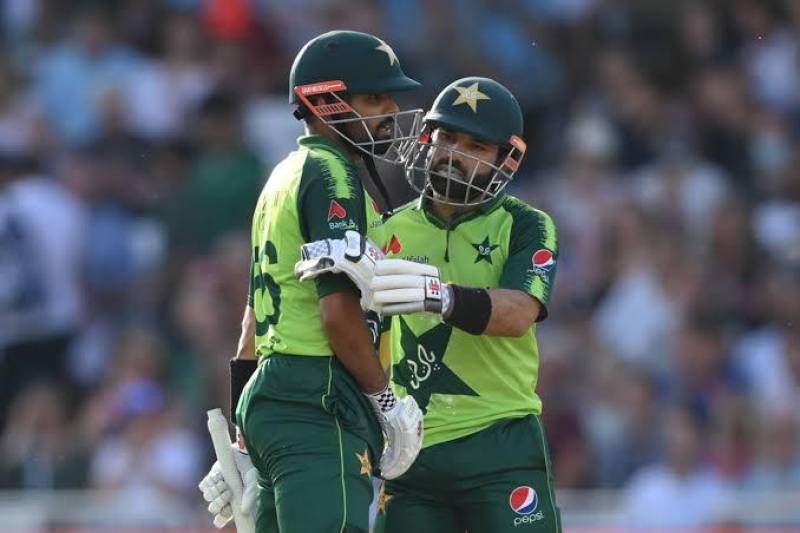 He hit four sixes in the 19th over and was declared Man of the Match.

As Pakistan chase a relatively 'soft target in the game against Afghanistan, Afghan bowler Mujeeb removed Pakistani batsman Muhammad Rizwan quite early in the innings just for eight runs.

Afghanistan have set a target of 148 runs for Pakistan in match 24 of the ICC T20 World Cup at the Dubai International Stadium Friday (today).

After Pakistani bowlers removed the top order in early overs, Mohammad Nabi (35) and Gulbadin (35) managed to keep the scoreboard ticking and set a reasonable target.

Earlier, Afghanistan won the toss and decided to bat first.

Men in Green will be aiming to maintain the top spot at the points table, whereas the Mohammad Nabi-led squad will try their best to carry the dominant performance forward in the mega tournament.

Cricket fans are excited as both teams dismantled opponents in the early fixtures. Without a surprise, it would be a tough match as both sides are loaded with star players.

Pakistani squad is flying high after clinching India and New Zealand. Afghan side cannot be taken lightly as they strolled to a 130-run victory over Scotland in the opening game.

Najib Zadran, Hazratullah Zazai, and Rahmanullah Gurbaz performed their best in the early games while Mujeeb Ur Rahman was the star of the second innings, taking five wickets on his T20 World Cup debut, as Scotland were bowled out for 60.

Afghan batting side outclassed the Scotland bowlers with their power-hitting and today they will face a dangerous bowling attack from the Pakistani side. Shaheen Afridi, Hasan Ali, and Haris Rauf have troubled the Indian team and Kiwis thus far, it’s highly unlikely that the Pakistan pace trio can be put under the pump by Afghans.

Meanwhile, Pakistan’s batting is headlined by captain Babar Azam and Mohammad Rizwan. Shoaib Malik's experience came to the fore in the chase against Kiwis, and in Asif Ali, Pakistan has a reliable finisher.

Pakistan team held an extensive practice session at the ICC Academy Dubai, a day ahead of the #PAKvAFG clash.#T20WorldCup21 #WeHaveWeWill pic.twitter.com/ay21W6wi67

The impressive feats over Men in Blue and Black Caps have made Shaheens the team to watch out in the cricket carnival but the unpredictability factor that has always surrounded them is something that Afghanistan can benefit from.

Afghan team hasn’t played much short format cricket due to the pandemic, but they have been largely successful when they have been able to get on the field.

The two sides last played a match in World Cup 2019 which was bagged by Green shirts by three wickets.