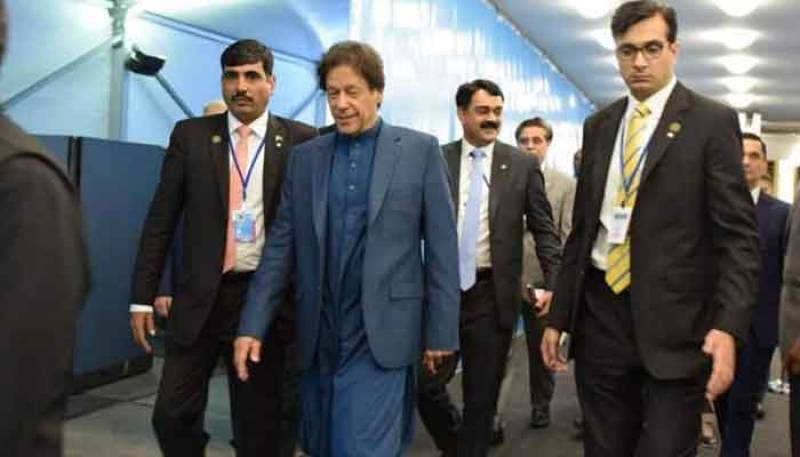 ISLAMABAD - Prime Minister Imran Khan Sunday arrived in Islamabad after a 10-day trip to Saudi Arabia and the United States, where he attended the 74th session of the United Nations General Assembly in New York.

Upon arrival, the premier received a grand welcome. A hefty number of Pakistan Tehrek-e-Insaf (PTI) leaders and workers were awaiting the PM at the airport to pay tribute to him after his successful speech delivered on Friday at the UNGA session.

The premier returned to the country via a Saudi commercial airline and received a grand welcome from leaders of Pakistan Tehreek-e-Insaf (PTI) who held placards and banners for the premier hailing PM Imran for his impressive speech at the UNGA session.

Addressing the crowd at the airport, PM Imran expressed gratitude as well as his wife Bushra Bibi as he said: “I would first of all, like to thank the public, the way you prayed for me and the Kashmiris. I would also like to thank Bushra Bibi for praying for me continuously. "

"You have to make sure to not be disappointed in bad times because the people of Kashmir are looking towards you. As long as they have us standing with them, they will continue their struggle and will attain freedom one day," he said.

He further avowed to unveil "the atrocities of Modi’s fascist government on all platforms of the world".

PTI’s Chief Organizer Saifullah Khan Niazi asked the party workers to reach the New Islamabad International Airport Sunday afternoon as the party would accord PM Imran with an unprecedented welcome, he said in a tweet.

This Jazba Of The Ppl Is Unmatchable #WelcomeHomePMIK ❤️ pic.twitter.com/5P56t7AadL

More: Till Kashmiris given self-determination right, Pakistanis not to sit back

Senior PTI leader Jahangir Khan Tareen also took to Twitter to urge the party workers to attend the reception for the prime minister who he said had “fought Kashmir cause like a true hero”.

“Let’s celebrate this win by giving him a hero’s welcome tomorrow at 5pm at the New Islamabad Airport. Don’t forget to be there,” he tweeted with a hashtag #WelcomeHomePMIK which trended on Twitter.

Talking to media prior to his departure for the airport in New York, the prime minister when asked for a message to the people waiting to welcome him at the airport, he said it was Allah Who bestowed upon respect.

Earlier, the prime minister left New York onboard a commercial flight after his plane developed a technical fault on Friday night.

Technicians tried but could not fix the problem in the special plane, which was placed at his disposal by the Saudi government, after it landed back in New York.

Officials said it was then decided to return to Roosevelt Hotel where the prime minister had been staying during his seven-day visit to New York, and to take a regular Saudi Airlines flight Saturday morning for his return journey, as he was anxious to visit the earthquake-hit areas and families of the victims.