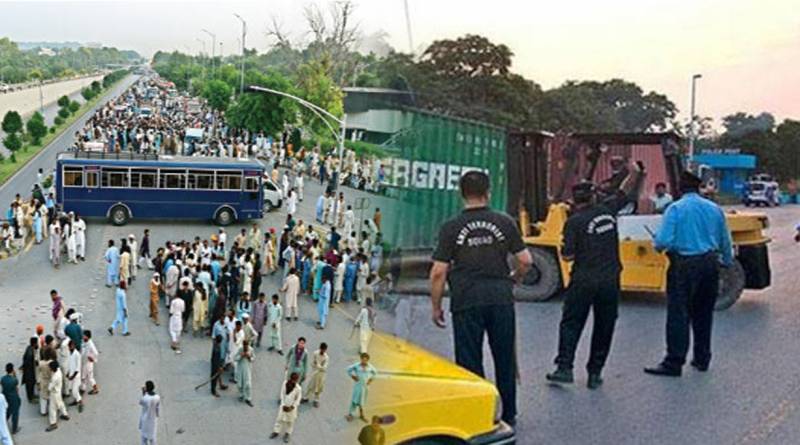 ISLAMABAD – Agitating farmers gave a two-hour ultimatum to authorities for negotiations as they marched on the country’s federal capital Islamabad for the second time, demanding restoration of previous electricity tariff and abolishment of all taxes and adjustments.

Over 25,000 protesters reached Jinnah Avenue and were marching towards Red Zone for the fulfillment of their demands while heavy traffic jams were witnessed on major highways.

Farmers earlier called off their protest on assurances from the incumbent government, however protesters, under the umbrella of Kissan Ittehad, flocked to the edge of Islamabad’s Red Zone for the fulfillment of their demands.

Thousands of Protesting Farmers continue Sit-In Near "RED ZONE" Islamabad.the protesting farmers have reached Jinnah Avenue& were marching towards D-Chowk, outside Parliament of #Pakistan for the fulfillment of their demands.The Police have sealed the red zone#FarmersProtest pic.twitter.com/gXLI9PRrUe

The agitators also called for an end to the black marketing of fertilizers and reduction of urea rates and demanded the removal of blockade from canals. Agriculture should also be given the status of the industry, the banners carried by protesters cited.

Meanwhile, federal law enforcers said the farmers would not be allowed to enter the Red Zone as the demonstrators may have batons or other weapons.

Capital administration also attempted to negotiate, however, warned of action against those who damage property.

In 1907, the ‘Pagri Sambhal Jatta’ wave began in Lyallpur, now Faisalabad, and acquired the shape of a ...

On the other hand, farmers claimed that no government has arrived to negotiate with them and only the local administration approached them to negotiate for providing a place for the sit-in.