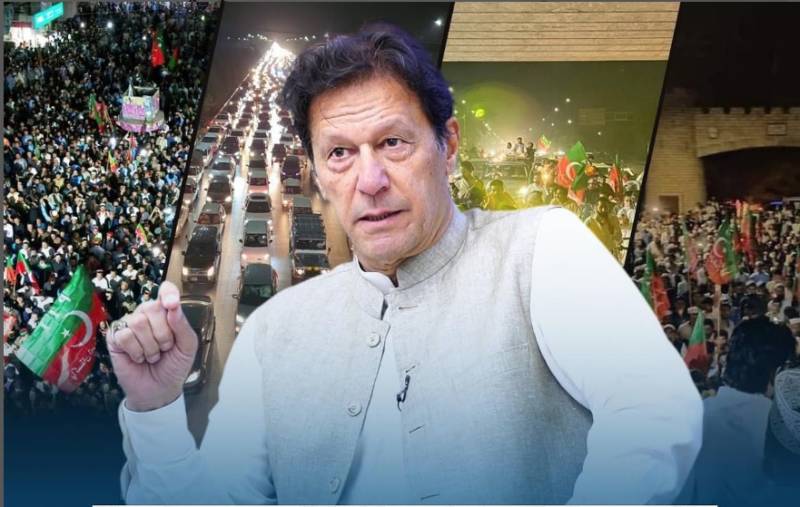 ISLAMABAD – Former prime minister Imran Khan has announced that Pakistan Tehreek-e-Insaf would hold a long march on Islamabad in the last week of May.

PTI Chairman Imran Khan made the announcement after holding a core committee meeting of his party however the cricketer turned politician did not mention the exact date.

Speaking in a video message, Khan urged the nation to join the long march, saying the country had been insulted. Pakistani politician, who alleged the opposition's move to hold a vote of no confidence against him was part of a US-led conspiracy, said most corrupt people have been imposed on Pakistan.

Lamenting at the incumbent setup, he maintained that the person who has corruption cases of Rs40 billion becomes premier.

The former PM also announced that their preparations for the long march will start from Monday, calling on masses to come to the streets with flags. “I want to address Pakistani youth here in particular that you have to come out on Chand Raat with flags and let the world know that Pakistanis are a lively nation,” PTI chairman said.

He continued saying PTI long march would be the ‘largest gathering in the history of Pakistan’, saying no country will ever impose a corrupt gang on this nation. All decisions about Pakistan will be made by the Pakistanis from now onwards.

Earlier in April, Imran Khan became the first prime minister to be ousted from office through a no-confidence motion, following which Shehbaz Sharif was elected as the 23rd premier of the South Asian country.

NEW YORK – The US government has once again refuted allegations of any involvement in a plot to toppled Prime ...

Tens of thousands of PTI activists took to Pakistan’s streets following as Khan earlier called for protests following his removal from office.