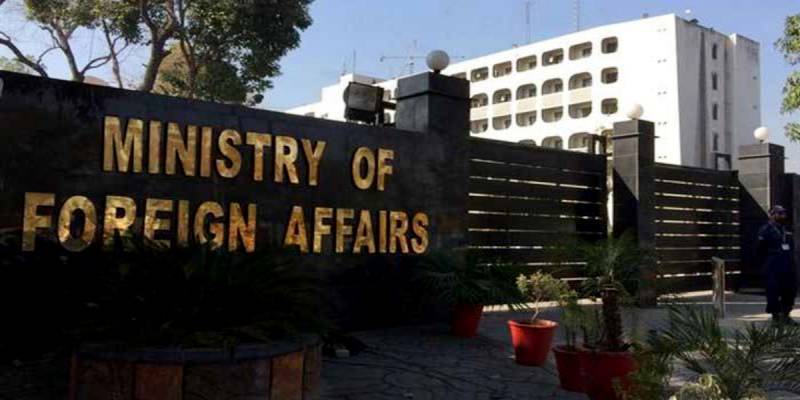 A statement issued by the Foreign Office spokesperson said “Pakistan had shared incontrovertible evidence with the international community of India’s state sponsorship of terrorism and subversion against Pakistan”.

Pakistan has shared incontrovertible evidence with the int’l community of India’s state sponsorship of terrorism & subversion against Pakistan. This year alone, India has been involved in terrorist attacks in Johar Town, Lahore & against Chinese & Pakistani workers at Dasu. 2/2

It further added that “India uses terrorism as an instrument of state policy and only in 2021, India has been involved in terrorist attacks in Johar Town, Lahore and against Chinese and Pakistani workers at Dasu”.

Pakistan's former ambassador to Thailand, Asim Iftikhar, who has been appointed as the new spokesperson for the Foreign Office, said the Indian ruling party BJP-RSS combine had a clear anti-Muslim and anti-minority agenda as they target Pakistan with false propaganda campaigns for both ideological reasons and political expediency.

India’s so-called surgical strikes and ill-conceived misadventure in Balakot in February 2019 were exposed as based on nothing but lies and deceit, the statement further said.

Pakistan restored the strategic balance in the region by retaliating against India in a measured and firm manner, he said.

“Our desire for peace notwithstanding, Pakistan will resolutely defend itself against any aggressive Indian designs,” he mentioned saying “the understanding of reaffirming of 2003 ceasefire in February 2021 only demonstrated that Pakistan was a responsible state that wanted to maintain peace in the region despite irresponsible Indian behavior”.

The statements from the Indian minister are a move to salvage some votes and remain in popularity. Lambasting at Pakistani state without explicitly naming, in light of BJP propaganda, Singh said “After losing two wars, one of our neighboring countries has started resorting to proxy war and terrorism has become an integral part of its state policy. It has started targeting India by providing arms, funds, and training to terrorists”.