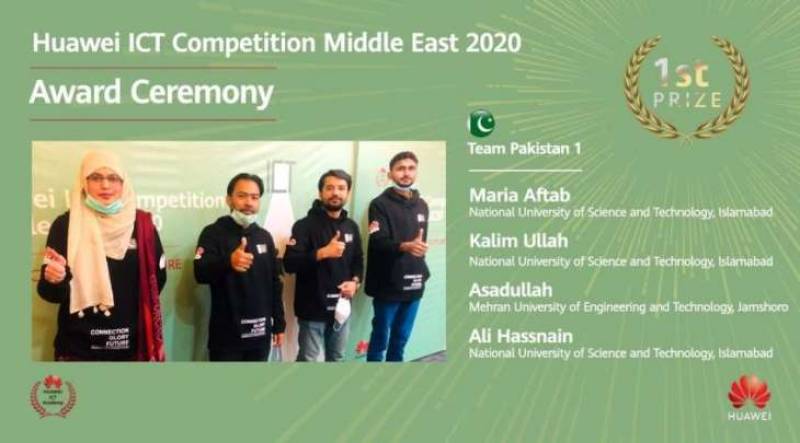 ISLAMABAD – Pakistani students have emerged as the champions of the Huawei ICT Competition Middle East 2020, winning the top two spots.

The team of three Pakistani students, Kalim Ullah (MS IT SEECS-NUST), Maria Aftab (MS IT, SEECS-NUST) and Asadullah (Mehran University of Engg. & Technology, Jamshoro), won first place in the competition in the Middle East category of the tech contest and qualified for the final global competition.

More than 15,000 students and 440 universities from all over the world participated in the event held virtually this year.

The final leg included 13 teams from 27 universities in which Pakistan team emerged victorious, winning prizes that include US$20,000 prize money, Huawei MateBook laptops, smartphones and also a chance to join Huawei Pakistan.

Thousands of students from Pakistan applied for the highly competitive tech contest but Huawei selected the top 500. “The list was further narrowed down to 150 students” who were offered free training and virtual classes during the preliminary round.

Finally, the best 30 students from Pakistan were finalised for the final national round and shortlisted the top 6 for the Huawei ICT Middle East competition, Asadullah explained, adding that “we were among the six lucky Pakistanis selected for the regional contest.”